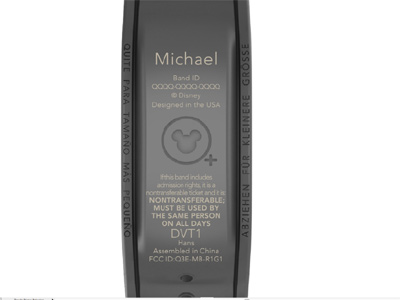 Disney has always been a pioneer with technology – from their innovations a long time ago in the multiplane animation camera to their more recent developments like how to design a balloon animal that doesn’t get distorted as it is inflated. Recently Disney submitted a new electronic device for approval to the FCC.

What Is The FCC?

The United States Federal Communications Commission is a government agency that is responsible for managing the radio spectrum. It makes sure that electronic signals don’t produce unintended interference.

The application that Disney filed with the FCC was for a new type of wrist band with RFID – Radio Frequency Identification technology. Disney has called this new wrist band the “Magic Band”.  The inscription on the band states it was designed in the United States and assembled in China.  It also has what seems to be the new FastPass Plus logo, which is an outlined silhouette of a Mickey Mouse head inside a circle.  The sample band appeared to be personalized with the owner’s name – Michael.

The application describes the new band as something you wear on your wrist that transmits a wireless signal, is powered by a small round battery, and has no on or off switch.

The device itself was designed by a Seattle-based product development company called Synapse Product Development – a company focused bringing mechanical, electrical, and software engineering to solve problems in the entertainment, electronics, and life sciences areas. They have worked on product like Nike GPS sports watches, video surveillance systems, and Bluetooth headsets.

Why A New Wrist Band?

Disney hasn’t announced the purpose of the wrist band – so we don’t know for sure. But it seems likely that this new Magic Band could be used to replace paper admission tickets, to allow for entry into resort hotel rooms, and perhaps even allow for purchases at restaurants and shops.

There could be reasons beyond simple guest convenience that Disney wants to use RIFD technology to track guests. What if Disney could precisely understand traffic patterns, and then take action to better distribute people around the park – such as deploying entertainment or sending special offers to mobile phones? Or what if Disney could move a mobile ice cream stand or popcorn stand near restaurants that had long wait times? That could make a huge difference in creating a better experience for guests.

There could even be safety benefits with the band. What if you were able to identify allergy information, or contact information for children that might get lost? Paramedics or security officials could use the data stored in the Magic Band to help in emergency situations.

While we don’t know for certain if or when Disney will implement this technology, it will be interesting to see how Disney continues to improve our experience in the parks – perhaps as part of the new FastPass Plus initiative. It’s a fascinating time be a Disney fan.