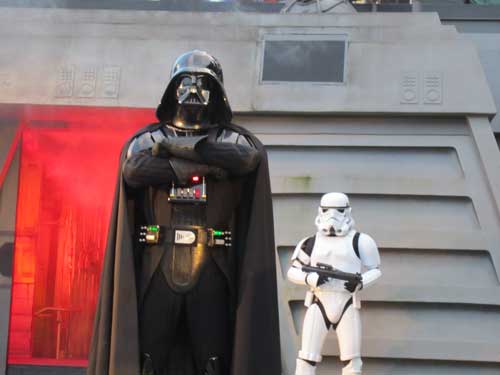 So it’s old news by now, but just in case you haven’t heard it, let me break it to you: Star Wars is coming to the Disney Parks in a BIG way.

Yes, there are Star Wars lands coming to both WDW’s Hollywood Studios and Disneyland Park, and with the Star Wars Launch Bays already open and the popular galactic heroes and villains already drawing tons of crowds for meet & greets, the “Galaxy far, far away” isn’t going away anytime soon.

So I started to think about where all of these new characters were going to stay in the Orlando area. I mean, sure, they will probably get their own places eventually, but some of them might be looking for temporary housing while they are getting settled and comfortable in Central Florida. Then I had a fantastic thought: the Star Wars characters would be GREAT roommates for some lonely Disney characters who are already living in the area!

Alright, at first glance, this one is going to seem a little bit weird, I admit, but let’s delve into it a little deeper, shall we? We all remember that Bambi’s mother was shot and killed by a hunter in the woods early on in the movie, right? Of course, that was a horrible act that would shape the rest of Bambi’s life. Well, do you also remember that Boba Fett’s father, Jango Fett, was killed by Mace Windu (and his awesome purple lightsaber) in Star Wars Episode II: Attack of the Clones? It’s a common thing for new friends to bond over grief, and I think Boba Fett & Bambi would have an awful lot to talk about! Maybe Bambi could help Boba get over the hatred he harbors for the Jedi, and maybe Boba can teach Bambi how to use a blaster (it might be hard with hooves; maybe he could hold it in his mouth?) to finally get revenge on the man who shot his mother that fateful day. I see this as a win-win!

This one is definitely a no-brainer. Princess Leia is tough, sassy, and pretty darn cool, so she would obviously need a roommate that could match those qualities and keep up with her. You can’t get any tougher in the Disney universe than Megara, or Meg, from Hercules. I can just see these two finishing up their shifts and going out for a night on the town at Jellyrolls over at Disney’s Boardwalk Inn. I should give a fair warning, however, to any guys who are thinking about approaching them, since they’re both in relationships with slightly crazy individuals. First, Princess Leia is with a rogue space smuggler who may have shot a bounty hunter in cold blood in a bar over a dispute about money (the cold blood part is up for debate but that’s how I remember it!) Meg is pretty serious about a guy who has the strength to literally crush anyone in his way but is much too gullible and will listen to absolutely anything she says. My best advice would be to just buy them an adult beverage or blue milk at Jellyrolls and be on your way!

Okay, this roommate pairing may not actually work at all. I honestly would just want to get these two together for the fun of it! Imagine being a fly on the wall in that apartment! Chewbacca comes home from work, all tired from smuggling and flying at the speed of light all day and sits and puts his feet up on the coffee table as soon as he walks in the door. Donald spent the afternoon cleaning because it was his day off, so he’s unhappy that Chewbacca would put his dirty feet on the table. They start arguing, only it’s almost impossible to understand what the heck they are saying because neither of them speak very clearly. Then, since they both have really bad tempers, it could get completely out of hand. Before you know it, there are feathers everywhere, Chewbacca is screaming that he’s moving back to his home planet of Kashyyk, it’ll be a total mess! That’s only one way it could happen, though. These two could totally become BFFs and bond over their shared lack of mastery of the English language. Either way, though, it would be fun to watch!

Yoda & Mama Odie from The Princess and the Frog

The similarities between these two are truly astounding: Yoda is a 900 year-old little green alien that lives in a swamp, Mama Odie is a 197 year old cajun woman that lives in a swamp. Yoda helps Luke Skywalker realize his destiny, Mama Odie helps Tiana and Prince Naveen achieve their destinies. Yoda’s diet staple is Rootleaf Stew that he makes in a big pot, Mama Odie’s famous across the bayou for her gumbo. Could these two BE any more alike?! Plus, they are both completely full of wisdom (I’d say well beyond their years, but their combined age of 1,197 is a bit on the old side) and are more than happy to dish out advice to their young apprentices whenever they need it. I say find a nice little tree for these two to carve out a home in and they will be all set!

Again, this one might seem a little bit off at the start, but let me explain. Darth Vader really can’t be trusted with any regular, run-of-the-mill roomie. He has a volatile temper, goes off into fits of rage at the drop of a hat (or helmet), and needs a roommate who will listen to him completely and do everything that he says. Cue Pinocchio. The wooden puppet would be the perfect sidekick to the Sith Lord. He’s not going to question anything Vader tells him to do. As a matter of fact, he’ll probably jump right into any request Darth Vader has without even thinking much about it, especially since his conscience won’t be around! And all Darth Vader is going to have to worry about is Pinocchio’s lies, which honestly could be a problem, but Darth will be able to tell if his roommate’s lying (and won’t need any Jedi mind tricks to do so since the guy’s nose grows with each lie!) And don’t worry, if Darth Vader gets a little rough, he can’t use the Force Choke on a wooden puppet. The little guy will be fine!

Not all of these pairings will work out completely and of course there will be some bumps along the road, but I think this is a pretty good start for a beautiful friendship between the Star Wars characters and Disney characters. Before long I can even see them all getting together for big Christmas gatherings or birthday parties (although they probably won’t be able to get all 901 candles onto Yoda’s cake). These are only my perfect pairings though. Which Star Wars and Disney characters do YOU think would make great roommates? I’d love to hear your answers!