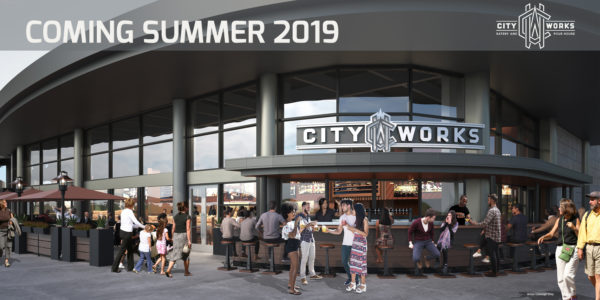 Disney Springs to get a Sports Bar in 2018: City Works

Disney Springs has a lot to offer, but one thing that it doesn’t have is a sports bar. If you want to enjoy a good drink and watch some of your favorite teams, you could always go over to the ESPN Club at Disney’s Boardwalk or to ESPN Wide World Of Sports Grill.

With as much as Disney Springs has grown up over the last few years, you would think that they wouldn’t have overlooked this favorite American pastime. Fortunately, that’s going to change next summer when Disney Springs will open its first sports bar!

The new restaurant will not be Disney-owned or ESPN-themed, but it will be the tenth of its kind in the country. The City Works Eatery and Pour House has locations from Doral, Florida to Pittsburgh, Pennsylvania and as far west as Texas.

City Works is known for their superior service, energetic atmosphere, and a great selection of local and global craft beers. Combine this all with an upscale restaurant, and you’ve got a winning combination.

Each restaurant is a little different, but you can expect plenty of TVs, including a whopper coming in at 165 inches.  They City Works’ website says they serve American food with “chef-driven twists.” You can expect traditional American appetizers like buffalo chicken dip, nachos, and wings, a variety of burgers and sandwiches, some delicious entrees, and dessert.   They will also serve 80 beers on tap and have an entire gluten free menu!

City Works will open next summer on the West Side of Disney Springs.

Are you excited for a sports bar in Disney Springs?