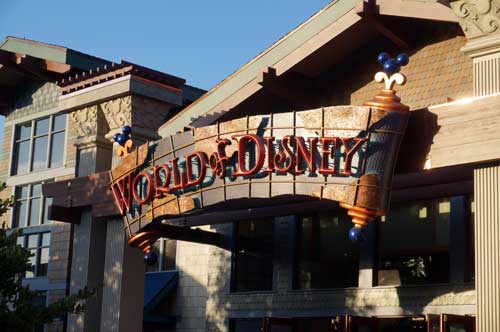 Everything in Disney has a story.

The Disney Imagineers are responsible for creating those stories and designing the areas to represent that story to the fullest extent possible. What’s great about Disney storytelling is that the Imagineers don’t have to come right out and explain the story to guests. They’re so good at their job that they can immerse us in the story and make us feel what they want us to feel without even telling us they’re doing it.

If you are a Disney fan like me, you probably like to know everything you can about Disney.  Knowing all the nitty-gritty details about every story is fun.

In the real world, the area that we now know as Disney Springs started out as Lake Buena Vista Shopping Village. It opened on March 22, 1975, with the primary vision being a shopping mall. Just two years later, it was renamed Walt Disney World Village and remained such until 1989 when the name was changed to Disney Village Marketplace. On May 1, 1989, Pleasure Island opened as an adult’s playground. Upon entering the area, guests paid a cover charge and could visit any of the nightclubs in the area. In 2004, this area became free to the public and lost ground as a premier nightspot. The nightclubs eventually closed in 2008.

In the mid-1990s, Disney invested $1 billion in various projects including the new Downtown Disney, which officially opened on September 7, 1997. Just one week later, West Side opened as a huge expansion offering shopping, dining at places like Rainforest Café and Planet Hollywood, and entertainment including a permanent installment of Cirque du Soleil and the now defunct DisneyQuest and Virgin Megastore. What’s more, World of Disney opened as the largest Disney store in the world.

The Transition to Disney Springs

Early 2013 brought another rebranding announcement to the area that would more than double the shopping, dining, and entertainment available, bring 6000 new parking spaces via two parking garages (named Orange and Lime), create a solution to the horrible traffic backups, and most importantly, tell a cohesive story.

The construction would also connect Disney’s Saratoga Springs Resort to Disney Springs with a pedestrian bridge.

The Backstory of Disney Springs

As the story goes, a cattle rancher discovered a natural spring here in the 1800s. Since water is essential to life, towns usually built up around water sources. The natural springs in Florida were not immune to these settlements, and the basis of the story is laid.

The area that the cattle rancher settled, Disney Springs, is now Town Center. It’s a renovated and modernized version of a storied Spanish settlement with 1920’s architecture. The building in which D-Luxe Burger is now housed used to be a settler’s cabin. Moreover, some of the old machinery is still in the area adding to the story and history of this area.

As the settlement developed into a small town then a larger community, more areas were added. The Landing (formerly Pleasure Island) was the community’s transportation hub where a passenger train once serviced residents. Contributing to the industrial nature of this area, rails can be seen in the road as evidence of the once popular railroad. (Surprise! Imagineers found a way to incorporate a railway!)

As in Town Center, buildings have been repurposed to hold modern-day amenities. STK is in the former train station, and the boat that used to be Fulton’s is now Paddlefish. Boathouse, which opened in the spring of 2015, is not only a fun nautical restaurant but also an attraction in itself with amphicars!

The original shopping area maintains some of the original theming as it is called The Marketplace. The Marketplace’s theming is that of American Craftsmanship and includes an expanded World of Disney. This store, once billed as the largest Disney store in the world, now has even more to boast about as it is even bigger than the Downtown Disney version.

Finally, the West Side, as the story goes, was built in the 1950s as a town expo. Although many of the attractions, including Splitsville, Cirque du Soleil, AMC Movie Theater, and House Of Blues, remain unchanged, the story of this section is now seamlessly woven into the rest of the area.

When Disney Imagineers were trying to reconcile the backstory of the new Disney Springs, they liked that it also tied in with the history of Walt Disney World. It started before Walt arrived as the rancher’s settlement and slowly grew into the thriving metropolis it is today. In the meantime, Walt’s parents were married in central Florida. Perhaps, they say, Elias and Flora told Walt about this quaint industrial town built around a natural spring and he decided to build his theme park around it.

The effect, now, is that the three previously non-connected districts now have a story that ties them together thanks to the new Town Center section. Imagineers hope that guests will experience the sense of time and place contributing to a more harmonious vibe throughout the area.

Have you heard the backstory to Disney Springs?