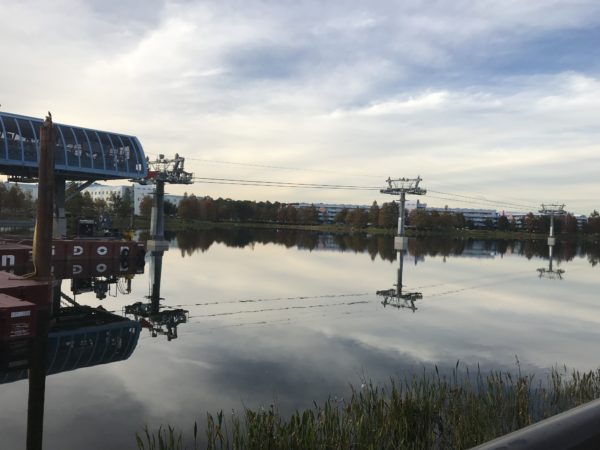 Disney filed some mysterious plans on February 15th, 2017, and they confirmed what lots of people suspected on July 15th, 2017 – that Disney would be building a gondola system! Construction started in 2018. By December 2018, construction was nearly complete!

Disney started testing the gondolas in January 2019, and Cast Members are now in training to operate the high-tech system.

While Disney hasn’t officially announced an opening date, some Disney fan sites are reporting that Cast Members on property have said that the Skyliner will open, at least in part, on August 28th.

Why is this significant? Because Star Wars: Galaxy’s Edge opens on August 29th!

Cast Members also say that the stations at Disney’s Hollywood Studios, Disney’s Caribbean Beach Resort, and the joint station between Disney’s Art of Animation and Disney’s Pop Century Resort will open while the station at Epcot’s International Gateway will not be open at this time. Also, since Disney’s Riviera Resort will not open until December 2019, this station will not be open yet.

Since this rumor seems to make a lot of sense, let’s also take a look at where these stations will be located specifically:

What’s really great about this new form of transportation is that it will connect guests to the Epcot monorail (by way of a short walk through the park – admission and park hopper required), which can then take guests to Magic Kingdom via the Transportation and Ticketing Center then to several other Deluxe Resort Hotels including Disney’s Contemporary Resort, Disney’s Polynesian Resort, and Disney’s Grand Floridan Resort and Spa. This significantly reduces reliance on the bus system.

Will you ride the Skyliner?