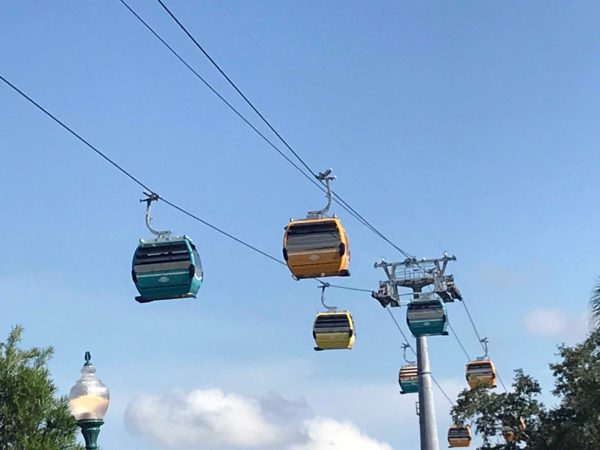 Disney Skyliner: My First Ride Was Cool (In More Ways Than One) Photos, Videos

On Friday, September 27, 2019, Disney celebrated the grand opening of the Disney Skyliner – the newest transportation system that allows guests to get around the Walt Disney World Resort.

I had a chance to take a flight on the Skyliner, thanks to the nice folks at Disney Media Relations, and I’m excited to share my experience with you!

Here is what I saw and learned, in an easy-to-read Q&A format:

Does it have air conditioning?

No, the gondola cabins do not have air conditioning.  This has been a point of great curiosity by many fans who have wondered what it would be like to ride in the cabins in the Florida heat.  See the next item.

For me, no.  I rode in the early afternoon on a day when it was in the mid-80s.  Several features keep the cabins comfortable.  The gondolas move pretty quickly and the air flows through at a nice rate.  Also, the windows are tinted, which keeps the sun from heating the cabins.

How does the ventilation work?

There are two vents on the front and three on the back.  The people in the cabin can open or close the vents.  When it gets cool in Florida, which does occasionally happen, people riding the Skyliner will probably want the close the vents.  I imagine that they will usually be open, and they provide nice cross-ventilation.

The gondola cabins moved just a little bit when entering or exiting, but once in the sky, the ride for me was very stable.

How many people does it hold?

Each Skyliner gondola car holds up to 10 people, or six if there is a wheelchair or ECV.  The cars are bigger than you might expect.

Check out this video of my first ride!

Do you stand or sit inside the cabin?

The Disney Cast Member will instruct you to sit at all times.

What parks and resorts are part of the system?

How long does it take?

Here are the approximate travel times, which assume the system is working at full speed. Note that the system does occasionally slow down or stop due to loading or maintenance issues.

How many gondola cars are in the system?

Disney mentioned there are nearly 300 gondola cars.  Some have character designs on the outside, while others do not.  The character designs look terrific and are lots of fun, but the gondolas without them provide a slightly better view of the outside if you are taking photos.  Both provide great new views of Disney property never seen before.

Do you have to pay to use the Skyliner?

No.  It is open to Disney guests, and you don’t have to enter a park or stay at a Disney Resort to ride the Skyliner.

Check out this video of the opening ceremony!

Do you need a FastPass?

No.  The Skyliner is outside the parks and is continuously loading.  It will be interesting to see if some lines form after Epcot or Disney’s Hollywood Studios closes for the day, but it seems like the system moves a lot of people from point to point very quickly.

Is it faster than a bus?

I was not able to time the rides or read about official comparisons, but I believe that the Skyliner will be much quicker than a bus.  It loads continuously and doesn’t have to stop for traffic.

Can you bring a wheelchair, ECV, or stroller?

Yes.  The cabins are big enough the accommodate a wheelchair, ECV, or stroller. The cabins move very slowly when loading or unloading, and there is also a leg of the load station where the cabin can be completely stationary for loading and unloading.

Yes, there is occasional narration inside the cabins to share interesting facts about the Disney Resort and the area you are riding through.

Will people afraid of heights be OK?

This is one you will need to decide for yourself.  For me, the ride was smooth and felt safe and fully under control at all times.  However, there are times when you are high off the ground.  If you are afraid of heights, you might want to stick with a bus.

What happens if there is an emergency?

Each cabin also has an emergency kit under the seat that includes water, a glow stick, a notebook, and waste disposal packets.  These are in a sealed container and should not be accessed unless there is an actual emergency.

Do you have to go through security to ride the Skyliner?

No, you don’t have to go through a security checkpoint before going on the Skyliner.  The stations are at Disney Resorts and are outside the parks.  Once you arrive at the Skyliner station at the Epcot International Gateway entrance or Disney’s Hollywood Studios, you will need to go through security before entering the park.

Is there Skyliner merchandise?

Silly you, of course!  Check out this page for a rundown of all the Skyliner merchandise, plus a video of all the goodies you can get!

Personally, I loved it!  The ride was smooth, quiet (after you left the station, where all the machinery sits that runs the Skyliner), tranquil, comfortable, and peaceful.

I think that Disney has a hit on their hands and that people will value the convenience and fun of connecting from their resort hotel to Epcot and Disney’s Hollywood Studios.

I also think it will open up new ways to vacation on Disney property.  People at the Art of Animation will have a faster and easier way to get to the Disney Boardwalk, for example.

Are you excited to ride the Skyliner?