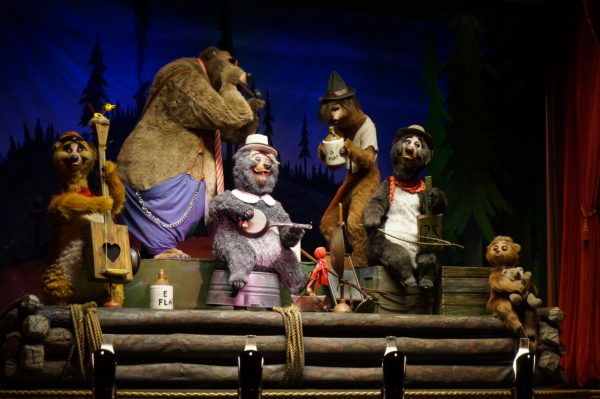 There are plenty of rumors in the Disney universe.

People like to speculate and share what they have heard from everyone from bus drivers to company insiders.  People also want to know what will happen in advance.  The recent closures of The Great Movie Ride and Ellen’s Energy Adventure in the Universe Of Energy Pavilion after the announcements at the 2017 D23 Expo left fans with relatively little to plan a final ride.

Disney, who typically has not commented on rumors in the past, is now proactively responding to these speculations in some clever ways.  This represents a new trend for how Disney deals with social media.

Let’s take a look at four recent rumors and how Disney responded.

In 1998, the show became The Enchanted Tiki Room: Under New Management and was hosted by Iago and Zazu from Aladdin and The Lion King, respectively. However, in 2011, Iago was damaged in a fire, and Disney restored the attraction to a shortened version of the original show.

Rumors have been swirling since 2016 that a new overlay might be coming to the show: a Moana theme! This would make sense since both have a tropical setting. Perhaps Hey-Hey would host? I’m not sure how that would go… The rumor is fed by Disney’s promise of 50 magical enhancements for the 50th Anniversary in 2021, plus a park-wide push to use intellectual property from movies in the parks.

But alas, this rumor is not true. Disney revealed that “a little birdie” told them that speculation was their “beloved Tiki birds” were on the chopping block saying “’toucan’ play at that game… there are no plans for our feathered friends to fly the coop any time soon.”

Disney typically didn’t respond to rumors at all, but in this case it did.  And it wasn’t the last time.

Country Bear Jamboree is often called “Walt’s last laugh” because he died just a few days after his Imagineer Marc Davis showed him the sketches. This attraction in Frontierland was also an opening day staple and is deeply connected to Walt Disney.

Internet rumors swirled that that Country Bear Jamboree could be replaced with a Toy Story audio-animatronic marionette show similar to the Woody’s Roundup show in Toy Story 2. Again, this is said to be one of the 50 “magical” enhancements for the 50th anniversary.

Could Disney possibly replace such an iconic attraction? Would they really place another Toy Story-themed attraction outside of the brand-new Toy Story Land in Disney’s Hollywood Studios? If the last domestic version of this attraction and not to mention the original version closes, would the Tokyo Disneyland version also close? Would the Disney World version suffer the same fate as Disneyland’s?

Don’t worry. All of these questions are easily answered with a single word: “No.” Disney said in a blog post that the Country Bears will “not be going into hibernation anytime soon.”

Again, Disney publicly comments on a rumor to shut it down.  Not typical, but now not the first time either.

Tomorrowland Speedway was an attraction created by Walt Disney himself. He loved driving, and he wanted his children and grandchildren to experience the rush of driving too. Tomorrowland Speedway puts kids behind the wheel of gas-powered go-karts in a safe, enclosed track.

The problem that many guests have identified is that Tomorrowland Speedway doesn’t fit in Tomorrowland because, while it is fun for kids, it doesn’t necessarily portray the future of transportation.

This fed the rumor that Tomorrowland Speedway might finally be getting an update. According to the rumor, Elon Musk, the creator and owner of Tesla, was in talks with Disney World to replace the gas-powered go-karts with electric ones.

This would be a very interesting sponsorship if it were true, but Disney has squashed the rumors on their blog.

After this incident, it seems, Disney is on a roll.  They are consistently correcting rumors that get fans riled up.  Instead of remaining silent, Disney is engaging in a two-way discussion on the ideas that bubble up on the internet.

Walt’s original plans for Disney World included an airport, so when fan sites posited recently that Disney had plans to launch a domestic airline by scooping up smaller regional airlines, the idea was not too far-fetched. When you consider that Disney already provides bus transportation between Orlando International Airport and Disney resort hotels via Disney’s Magical Express, the idea seems even more plausible.

Rumors said that the Disney airline would be launched by 2021 and would serve large cities including Chicago, Los Angeles, New York, and Detroit. Inflight perks would include streaming of the Disney+ service, Mickey Ice Cream bars, Disney characters, and a complimentary checked bag. Considering that the flight is often the most stressful part of an otherwise magical Disney vacation, this sounds pretty amazing. If Disney could take control of this portion of guests’ trips, they could, theoretically, control nearly the entire experience.

All that said, Disney has denied any possibility of this happening.

The moral of the story is, “you can’t trust everything you read on the Internet.” Disney said in response to the Enchanted Tiki Room rumor, “Although we won’t address every rumor, we want to set the record straight…”

As I mentioned above, it has not been customary for Disney to address any kind of rumor. However, they have recently been addressing rumors more directly, which is quite an interesting development.

Personally, I think it is a positive move.  Disney truly can’t address every idea that pops up on the internet.  However, if these rumors gain a lot of steam, upset fans, and cause confusion, Disney is serving everyone well – themselves and fans alike – in commenting on the situation.