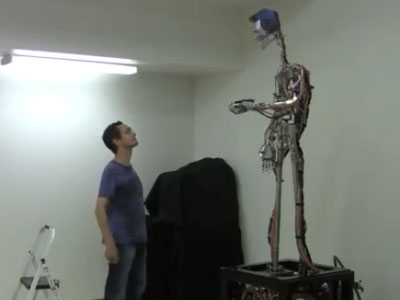 But sometimes I think we might just forget that there is a lot of research and invention that needs to happen.

Long before an advancement makes it into a theme park, someone has to do some basic research, which eventually becomes a usable technology, which then eventually shows up in the parks where we can enjoy it.

The current Audio Animatronics in use at Disneyland and Walt Disney World typically use hydraulics – a technology which is old but still reliable. Remember, those animatronics in The Carousel of Progress or The Hall Of Presidents need to make their motions hundreds of times a day, every day, without breaking.

By the way, an exception to the use of hydraulics in audio animatronics is Walt Disney’s Enchanted Tiki Room. There, the animated birds and flowers are located directly above guests. Disney didn’t want to use hydraulic fluid in these characters, since a mechanical failure that resulted in a leak would mean guests covered in nasty hydraulic fluid. And that wouldn’t be very magical at all.

We’ve probably heard it a million times – Disney is looking for more ways to make the theme parks interactive. Today’s youngsters don’t just want to sit and watch stories unfold. They are used to computers and video games – where they are a part of the story. Recent attractions, like Toy Story Mania and even the Monsters Inc Laugh Floor and Turtle Talk With Crush, involve the audience far more than older ‘sit and watch’ attractions like It’s A Small World or The Haunted Mansion.

Disney Research To The Rescue

Disney Research is the part of the Disney organization that creates the science behind the magic. Founded in 2008, the research arm of the company is closely associated with academic institutions like Carnegie Mellon University, and is made up of labs in places like Glendale, California (just a few miles down the road from the company’s headquarters in Burbank), Pittsburgh, Pennsylvania, and Boston, Massachusetts in addition to a location outside the US in Switzerland.

They have created some amazing technologies – like the Amazing Destini who has unscripted live conversations with guests.

The creative scientists at Disney Research are looking for more modern and advanced technologies that can be used to create more interaction. And that leads us to a most unique game of catch.

Play Catch With A Robot

The wizards at Disney Research have created an animatronic robot that can play catch with humans – which I would say definitely qualifies as having both modern technology and an interactive bent. The project was originally made from components of the Xbox Kinect but was later switched to Xtion Pro Live, which allows for tracking of objects in three dimensions.  The robot will catch balls thrown to it, and will then throw them back. In classic Disney style, if the robot misses a catch, it will look back or shrug its shoulders.

Based on the video below, it seems that the untrained test humans who are playing with the robot are having a pretty good time.  And while the robot in the research looks just a tad bit like those creepy Terminator robots from the movie, I’m sure that Disney would dress it up before it hits a theme park.

I wonder how long until we see this technology show up in the parks – or if we ever might see it at all?

What do you think about playing a game of catch with a robot?