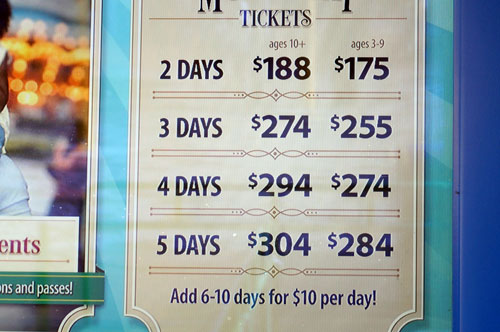 On Sunday, February 22, 2015, Disney raised admission ticket prices as they usually do each February.

The prices for multi-day Magic Your Way tickets, which many visitors purchase, increased by $1-$2 per day.

These theme park price increases represent about a 5% increase.

The overall inflation rate, or the rate at which prices increase in the economy in general, was a mere 0.8% is 2014 based on data published by the US government on January 16, 2015.  This means that Disney is increasing its prices by a much faster rate than most other things in the economy – about five times as fast.

Beyond ticket price changes, reports state that Disney made two other changes.

The biggest change is that Disney no longer offers a no-expiration option on tickets.  In the past you could upgrade your tickets so unused days didn’t expire and you could use them on a future trip.  That is no longer an option.

Additionally, one-day tickets to Disney’s water parks will now allow you to park-hop between Blizzard Beach and Typhoon Lagoon in a single day.

How do you feel about Disney’s latest ticket price increases?