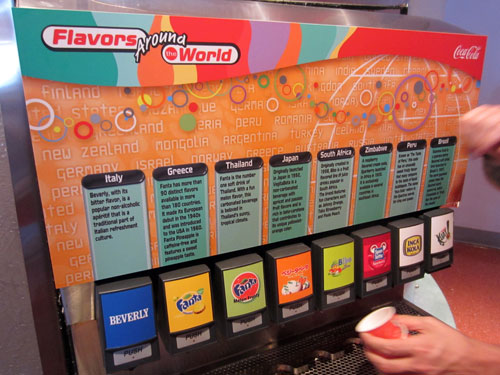 By now, we’ve all heard of or maybe even used Disney’s MagicBands. To review, these rubberized bracelets, worn on the wrists of Walt Disney World visitors, allow guests to make reservations as many as 180 days in advance. They also allow for PhotoPass pictures taken on rides to magically appear on your MagicBand, so no more searching for your picture at the end of a ride! What’s more, your food order can magically appear at your table without even telling Disney where you’re sitting because, well, they just know! How do they know, you ask? Because of RFID, or radio-frequency identification, technology. MagicBands aren’t the only thing that has this technology, though!

Disney has offered unlimited refillable mugs with the Dining Plans or for individual purchase for a while now, but RFID technology is allowing Disney to step up their game by using the same technology on traditional paper cups. The new Rapid Fill mugs are RFID enabled and the new Rapid Fill machines are smart! They know whether you are using a paper cup or a mug, how many refills you have, and how long those refills are good. Seems harmless, right?  Read on, then you decide.

Here’s how it works: Once your purchase your paper cup, you can go to any Rapid Fill station. Choose your drink, place the cup on the tray (it won’t work if the cup isn’t sitting on the tray), and push the button to dispense your drink. Enjoy! By the way, this works the same way with the mugs.

Don’t enjoy too fast, though! Regardless of whether you’re using the paper cups or a mug, you can only get another refill after waiting for two minutes. (Disney probably did this to discourage guests from filling up other containers.) After two minutes, fill up and enjoy again!

Paper-cup-drinkers do not get unlimited refills. The screen on the Rapid Fill machine will tell you how many refills you have left. When you first purchase the cup, you get three fill-ups; in other words, after your initial fill-up, you may refill two more times within one hour. After an hour, your refills expire, and you’ll either have to purchase a new cup for the next hour or purchase a Rapid Fill Mug for unlimited refills.

Disney’s adoption of the RFID technology has been fraught with controversy, but like it or not, it seems that this technology is here to stay and sure to advance into other areas of the resort.

Has Disney gone too far in adding RFID chips to paper drinking cups?