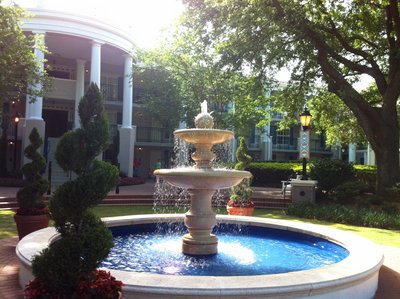 Disney now offers Princess rooms at Disney’s Port Orleans Riverside Resort.  With bold blue and gold colors, ornate furniture, and some very special touches, it’s as if you’ve entered the bed chamber of a real princess.  So for all those ladies out there, young and old, who dream of being a princess – even just for a day – now you can have a room to help make the dream come true.

Port Orleans Riverside is in the Disney Moderate Resort category.  Port Orleans is inspired by New Orleans, which makes it a perfect fit for Princess Tiana – especially since the Riverside area takes its architectural cues from the grand mansions far away from the cities. (Conversely, Port Orleans French Quarter will remind you of the historic city areas.)   The landscaping, fountains, and architecture make this an especially picturesque resort, and one that seems very relaxed, laid back, and generally more “off the beaten path” even though it is considered to be part of the Disney Springs area with its large set of shops and restaurants.

What Do You Get In A Princess Room?

What is the back story on these rooms?  The idea is that Princess Tiana from the Disney movie “The Princess And The Frog” has invited some friends over – and you are one of the luck guests.  She has set up the room with some special surprises, including:

But the biggest attraction of the room is built into the headboards above the beds.  When you press a special button, the scenes of the bayou light up with a fireworks show.  Very cool!  This is a feature that kids and adults alike enjoy.

So what does a princess pay for her own specially adorned room?  Prices start at $189 and go up from there depending on the time of the year.