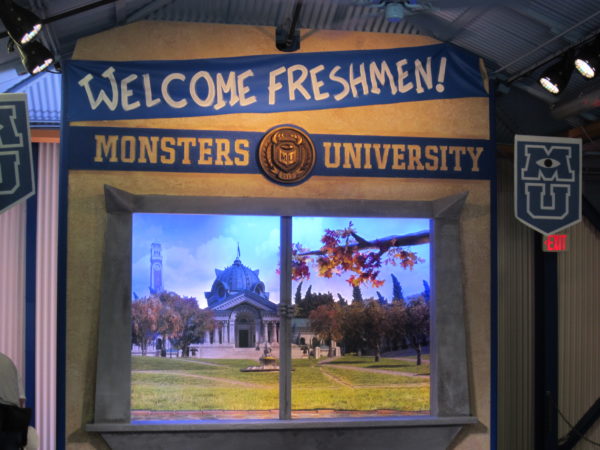 View of campus buildings in Monsters University Meet And Greet

Every year, the Disney College program welcomes thousands of participants. They come from all over the world, and they staff areas all over the parks and Disney resort hotels. Some international participants even work in their home country’s pavilion in the restaurants and retail stores in World Showcase.

When they arrive, Disney provides housing for them at four different locations including the Disney-owned Vista Way and Chatham Square, owned by a third-party and leased to Disney World. There are currently a total of nearly 1,600 units including 468 at Vista Way and 448 at Chatham Square.  Both properties are located east of Interstate 4, opposite from the parks and resorts.

Now, Disney is looking to move all of their DCP participants to one central location at the new Flamingo Crossings. This budget-friendly development was announced last year. It’s on the western edge of Disney World, and, when completed, will include 237,000 square feet of retail space and 29 off-property hotels.  Two hotels, a SpringHills Suites and a TownPlace Suites, are already open.  Five hotels are currently under construction.

It seems the biggest part of Flamingo Crossings, though, will be apartments. Design plans include 2,600 units, 1,300 of which Disney confirmed in October 2017 will be used for the Disney College Program participants. In February 2018, Disney said that all 2,600 units will be used for DCP and International participants. That’s more than one thousand more units that Disney currently has.

It’s likely that the College Program will expand, but probably not by that much that quickly, so Disney will need to fill empty apartments. They’ve already said that any empty apartments will be available for lease by current Disney employees for up to 12 months at a time.

The apartments will include many luxury amenities like sports courts, pools, and public drop offs for Disney buses and private drop offs for taxis and ride-shares. These spots will be separate from the residential entrance.

It will also house education facilities like training spaces, classrooms, meeting rooms, and a greeting center for the DCP participants. These areas are not expected to replace the Disney University areas, but they will supplement the more official gathering spaces. However, the apartments will remain budget-friendly.

The design, by Niles Bolton Associates Inc. will be similar to the Crosstown Walk Apartment complex in Tampa with a grid-like system of walkways.

The new complex sounds very nice, but there are some questions. First, Disney has had to make some rezoning requests. The current allowance is 60 feet from a highway, and the builders have requested an allowance of 30 feet. Also, some of the parking, which will only be on the outer rim of the apartments, is 750 feet away from some residential areas, which is more than five times what is currently allowed.

Regardless, construction will begin this year. Disney hasn’t announced an official opening date for the new apartments nor have they said which, if any, current DCP residences will close.