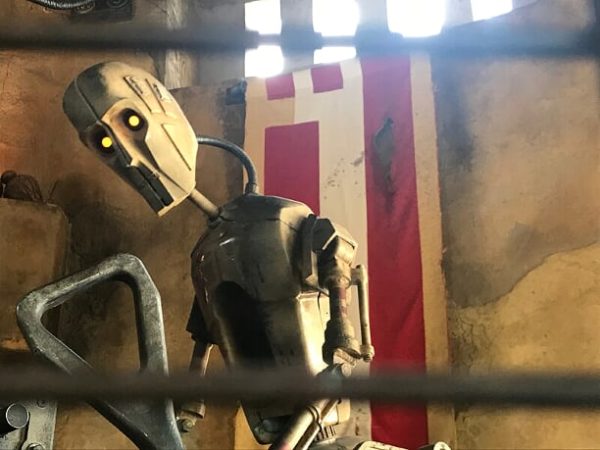 The droid introduced in 2017 as Jake the maintenance droid, or J4-K3, in Disneyland has no plans to visit Batuu at this time, according to an article from the OC Register and quotes from Disney+.

This means that we aren’t likely so see droids wandering around Disney parks anytime soon.

Jake was a 3 foot tall white and orange droid that has been a baby of the Walt Disney Imagineers.  In 2016, they used Disneyland’s Star Wars Launch Bay building to conduct some indoor play tests with Jake before unleashing him in one of the parks.

Once the Imagineers had enough faith, Jake made his first visit to Tomorrowland.  There was so much to consider and so many things had to go just right in order to keep all guests safe while Jake was moving around, even though Jake had lots of sensors and technology.

The Imagineers digitally mapped Tomorrowland so that Jake could find his way around, and having this map allowed him to “see” guests moving around him. He utilizes the computer algorithms to anticipate the likely path of each person.

Jake motions and directions were all communicated back through a computer that monitored the droid’s actions and surrounding. They would calculate battery power, position, direction, and affix a 3D laser scanning technology in order to assist in his ability to turn and keep from running over little sandal clad toes!

As he “strolled” through Tomorrowland, Jake chirped and beeped and showed off his many lights and means of communication.  His head moved, his lights blinked and he began to interact in the park and with those in it.

Disney Imagineers brought Jake to life and the guests that witnessed him in Tomorrowland in 2017 were blown away. Phones came out, pictures taken, someone even tried to climb on top of Jake they loved him so much.

However, Disney has no plan to introduce droids in the parks at this time.  It could be due to technology, budgets, or safety, but Jake will remain an experiment for a while.

Would you like to see droids wandering around Galaxy’s Edge?