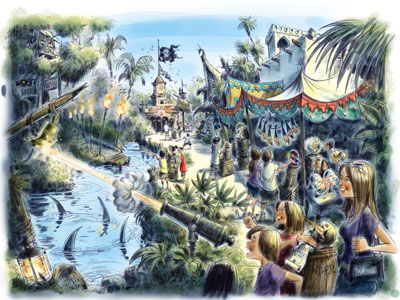 Disney is in the process of creating a new interactive game based on Pirates Of The Caribbean. It is scheduled to launch in the spring of 2013, although an exact date hasn’t yet been announced. It will be located throughout Adventureland, and from what we can tell it won’t be directly inside any attractions.

Instead, much like the other interactive games around Disney World like Sorcerers Of The Magic Kingdom or Agent P’s World Showcase Adventure, it seems that the game will be build into the surroundings of the park itself.

There will be no cards to active the effects (which is different Sorcerers Of The Magic Kingdom), and reports suggest there will be five different ‘raids’ or game sessions scattered around Adventureland. Effects will include cannons around the Swiss Family Robinson Treehouse, interactive skulls, and a pathway lined with flaming torches.

Some sites suggest that there may be a separate fee to play the game, but let’s hope that’s not the case.