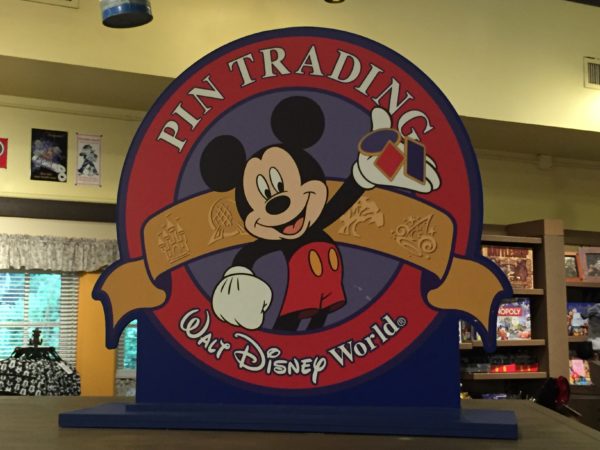 Disney pins have always been available in the Disney parks, but pin trading became official in 1999 when Disney celebrated the new millennium.

They’re popular souvenirs because they’re relatively inexpensive to buy and also lots of fun to collect and trade.

Disney has some rules and etiquette when it comes to trading in the parks.

Any guest can wear pins. Disney has a dress code policy that says that they reserve the right to ask anyone to alter their outfit if it poses a danger to themselves, other guests, or Cast Members, so completely covering yourself in pins might not be a good idea. However, you can display your pins on bags, lanyards, clothing, vests, hats, fanny packs, and just about anywhere else you can put a pin!

For safety reasons, the only Cast Members who aren’t allowed to wear pins are ride operators.

2. Do Cast Members have to trade?

Cast Members are required to trade pins with guests as long as the pin to be traded is acceptable. Cast Members can only decline a trade if the pin is unacceptable and not based on the rarity or how much they may personally like (or dislike) the pin.

3. What makes a pin acceptable?

The acceptability of a pin changes depending on what Disney Park you’re visiting. However, some rules are the same from park to park.

A pin proposed for trade with a Cast Member must be made of metal and depict a Disney character, park, attraction, or other Disney icon. It must also have the Disney copyright on the back of the pin. The pin also must have the pin back, and it cannot be a duplicate of a pin the Cast Member already has. Finally, it should not be damaged or show excessive wear.

4. What kinds of pins can’t be traded?

Pins that are any material other than metal cannot be traded, nor can personalized pins. All pins must have the plastic back; Cast Members are not allowed to accept pins that are broche style or clasp style.

Interestingly, this eliminates all pins that Disney created in the 1980s!

Pins that are associated with a costume or a service award cannot be traded either.

Many cast members wear pins – especially those working in the retail stores. Approach the Cast Member and ask to see his or her pins. If you find one that you like, propose a trade with one that you have.

7. Can I buy a pin from a Cast Member instead of trading one that I already have?

No. Disney does not allow money to be exchanged on property in exchange for a pin on a Cast Member lanyard. If there’s a pin you want but you aren’t willing to trade, you can often purchase it at one of the retail stores. If it’s not available at the store, buy another pin and propose a trade.

8. Where is the best place to make a trade?

All four Disney World theme parks – Magic Kingdom, Epcot, Disney’s Hollywood Studios, and Disney’s Animal Kingdom– are great places to make trades. The Cast Members in the retail shops are most likely to be carrying pin lanyards, but you can find Cast Members all over the parks including at quick-service restaurants and table-service restaurants, attractions, and just walking around as in the case of custodial Cast Members.

Many Cast Members around Disney Springs – especially at the Disney’s Pin Traders and World of Disney Stores – have pins to trade as well.

9. Can I trade pins with other guests?

Sure! Sometimes there are scheduled pin trading events, but if you see a guest on property wearing Disney Trading Pins, you can ask them if they would be willing to trade. Keep in mind that other guests are not required to trade and may deny trade on a pin just because they like it or because it’s rare.

10. How do I start my pin trading collection?

Disney pin trading is fun for the whole family. If you want to get into pin trading, head to Disney’s Pin Traders in Disney Springs. Cast Members here are knowledgeable of the hobby and can help you find the best starter set which usually includes a lanyard and some starter pins that you can either keep or trade.

What’s nice about these sets is that they include everything you need to get started at an affordable price without much preparation. While you’re in the parks, buy the set, and find a Cast Member willing to trade. In no time, you can have different pins that what you started with.

Besides Pin Traders, World of Disney, the largest Disney Store on the planet, also has a variety of designs.

If you want to get into Disney Pin Trading, you can also sign up for World of Walt’s Pin of the Month Club and get Disney pins delivered to your door every month! There are three affordable plans, so you can start your pin collection before you even get to Disney World!

Do you collect Disney Trading Pins?