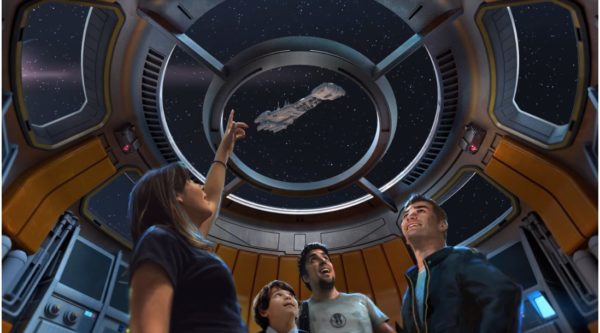 Disney’s New Patent could be Used at Star Wars Resort

I feel like Disney really dropped the mic when they announced that they would be opening a Star Wars themed hotel in Disney World.

Star Wars fans and Disney fans alike rejoiced because Disney promised that this resort will be unlike anything that currently exists in the world. It will have a Live Action Role Playing feel with costumes and unique stories for each guest.

In order to bring this to life successfully, Disney will need to create things that haven’t existed before. One of those things could be a recently published patent for the “Interactive Multiplane Display System with Transparent Transmissive Layers”. Basically, that’s a really fancy way to say that they’ve created a multi-dimensional screen that looks like a window thanks to the multiple layers of screens creating depth in a forced perspective kind of way.

This isn’t the first time that Disney has used a similar technology. Nearly 90 years ago, Walt Disney secured exclusive use of a multiplane camera. Back in the 1930s, Disney was the only film company who could use this technology. It allowed him to create animated films from 2D drawings placing objects in the foreground and background so as to create a perception of depth.

Multiplane technology has come a long way in the last century. Disney uses a similar, though much advanced, technology in the Na’vi River Journey in Disney’s Animal Kingdom, and now it’s expanding even more.

The new multiplane screen technology is similar in style and effect showing different parts of an image or video to create a very real, though virtual, reality.

Although we have no idea if or how Disney will actually use this technology yet, one possibility is as a fake window at the new Star Wars Hotel. This would create a sense of being inside a spaceship – removing any semblance of the outside world!

Even cooler is the fact that the patent includes the possibility of guest interaction with the screens. It’s not clear how much interaction will be possible, but, at the very least, you’ll be able to touch, select, and zoom in on parts of the screen, which can be made from OLED screens, the highest quality available on the market today.

It’s unlikely that Disney created this technology just for the Star Wars hotel though. It could also be used in the promised space-themed restaurant in Epcot or on the Skyliner windows to a lesser extent.