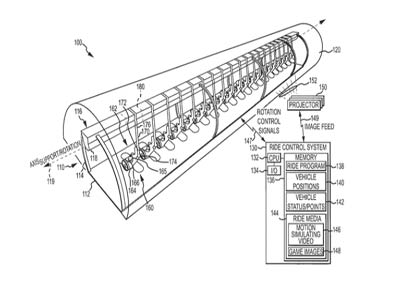 We all know that Disney creates innovative entertainment. But sometimes we forget that the finished product that makes us say “wow” requires a lot of research and investment. It is one reason why Disney World tickets cost so much money.

Some of that investment is in staffing Disney Cast Members. Some of it is in constructing buildings. And some of it is in research, like the interesting work that Disney Research has done on a variety of topics from a robot that can play catch to building a better balloon animal.

And some of that investment comes in legal protections, like those offered by a patent.

A patent, as you may know, is when the government gives an inventor exclusive right to an invention for a set period of time. In the United States, that means 20 years of protection.

What Did Disney Invent?

In December of 2010, Disney submitted a patent application for a new type of ride system called a “twister ride system.” And in March 2013 the US government awarded the patent, number 8,398,497.

So just what is this new twister ride system? It is “A ride system for rotating vehicles through a vertical plane or ride space about a common horizontal axis”. Hu? What does that mean?

Here is my layman’s explanation: To me, it looks like a tube with a spine running in the center of the tube, held up by arms. Ride vehicles can spin around the spine, and the ride includes images projected on the walls of the tube.

This really is a creative and novel ride system – there is nothing like it. It would allow the ride vehicles to circle the spine. When combined with projected images around the tube, I think it could make for a fun experience.

When Will We See It?

There is no public answer to this question right now. It is possible that there are no current plans at all to use this system.

But it is interesting that the ride vehicles in the patent application look like airplanes. Could this mean that Disney is considering a new ride to support the new Pixar Airplanes movie? That seems unlikely right now, since Disney normally waits until a movie has proven itself successful before they invest in developing and building a theme park ride.

Maybe it will be the way we can ride a dragon in the new Avatar Land at Disney’s Animal Kingdom?

Or perhaps it could be a way to fly through the 3D space of classic Disney movies like Peter Pan or Aladdin?

We don’t know right now, but it will be interesting to watch.

What do you think about this new ride system?