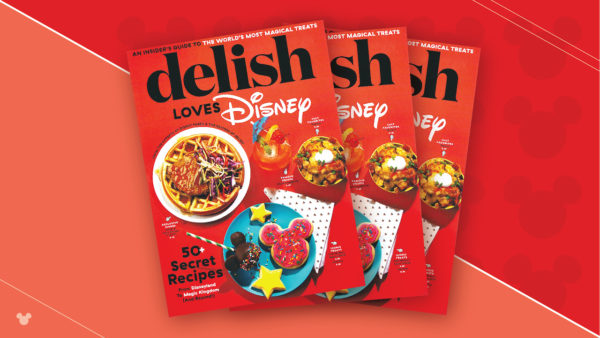 Disney Parks Team Up with Delish for “Delish Loves Disney”

Delish Magazine has teamed up with Disney Parks to create a one-of-a-kind project. Appropriately titled Delish Loves Disney, the magazine features 50+ recipes from around Walt Disney World. Fans can purchase the new book on Amazon for $13.99.

Some readers may recognize Dish Magazine as the account that produces Iconic Eats with Tess Koman. The popular video series showcases popular snacks and food dishes from theme parks, including several of the Disney Parks.

Let’s take a look at some more details of Delish Loves Disney:

“Delish Loves Disney is 100 glossy pages specifically created and curated by the editors at Delish, who have been writing and producing content about Disney Parks Food & Beverage for almost a decade. Delish Loves Disney features more than 50 recipes from our parks and resorts around the world – including 15 never-before-published – with a mix of scrumptious entrees, iconic Disney Parks’ snacks and some of our most beloved items that feature a variety of healthful ingredients.”

Who Worked on Delish Loves Disney?

“Working with our own Karen McClintock (author of all our Disney Parks Blog Foodie Guides), professionals around the world, the editors chose all the best dishes to spotlight – their favorites, our favorites, even some of their readers’ favorites, including  Canadian Cheddar Cheese Soup from Le Cellier at EPCOT at Walt Disney World Resort, Ratatouille from Bistrot Chez Remy at Disneyland Paris and Filmore’s Pot Pie from Disney California Adventure park at Disneyland Resort.

The editors of Delish filled Delish Loves Disney with memories, anecdotes and feature stories about their experiences visiting and reporting on Disney Parks. There are pages featuring home-inspired Disney products that readers can use to make their favorite recipes from the book and a ton of “fun facts” about the recipes.”

Delish Loves Disney can be purchased through Amazon on Demand for $13.99 – a perfect gift for that foodie or Disney lover in your life – or just to treat yourself.

What Delish Loves Disney Recipe do you want to try?