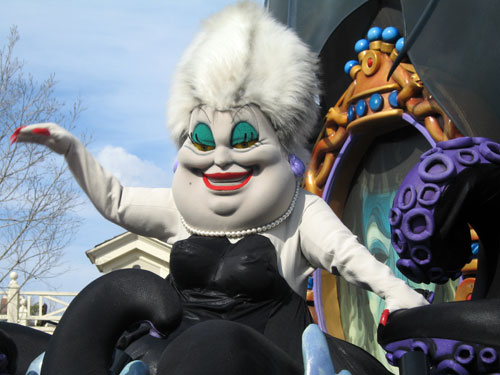 If you’ve watched more than just a few Disney World parades, you probably have a story or two (or more) about rude people who have no sense of etiquette. Whether it is an afternoon parade at Disney’s Animal Kingdom or an evening parade at the Magic Kingdom, it seems that finding a spot to watch a parade brings out the worst in people.

While most of us know most of these simple rules of etiquette, even the most refined among us can occasionally forget one of these items. Sometimes, reviewing a list like this will help bring back memories of times gone-by when someone else did something outrageous! Hopefully it will bring back a smile and you can share your parade etiquette gone-astray story below.

Let’s take a look at some etiquette rules for watching a parade at Disney World:

It’s hard to imagine that some people think they can show up on Main Street USA five minutes before the Main Street Electrical Parade is scheduled to go by and still get a good viewing spot. But it happens. Every day. Perhaps people who are visiting Disney World from another planet can be excused, but for everyone else – show up at least 30 minutes early. I know it’s no fun to spend your precious vacation time waiting for a parade when you could be, well, waiting for a ride, or waiting for a show, or waiting for an attraction. But waiting is part of the deal. Find a good spot well before the main event is scheduled to take place and enjoy a few moments of rest.

The Disney Cast Members who help to police the parade route are there for your safety and the safety of their co-workers. The parade floats move slowly, but they are huge and heavy. Did you know that a Disney Cast Member was actually killed by a parade float? It happened back stage, but it is still very sad and true. No, parades aren’t generally dangerous, but that is because Disney generally does a good job of keeping them safe. Pay attention to what the Cast Members tell you.

This is closely related to the point above about listening to Cast Members. If there is a curb, you need to sit on it. Don’t let little Susie Q then sit in front of you, on the street. That’s a no-no. The curb is as far into the street as you can go before you are asking for trouble. In the same way, if you are stationed behind a rope, keep all your body parts behind the rope.

If you have to wait for a while, you might want to go and grab a drink or visit the restroom. Completely understandable. I think it is AOK to hold spots for others in your party who will return shortly, but if possible be sure to use some type of visual indicator like a hat or bag where your friend will soon stand once again. Even so, be prepared for getting asked “are you holding these spots” about three times a minute.

5 – Allow Your Kids To Stand In Front Of You

Once you’ve staked out your territory, you own it – at least as far as I’m concerned. If you want to let your kids or your mother-in-law get in front of you, and you can do so without encroaching and expanding into someone else’s territory, have at it.

6 – Sit Or Stand As You Choose

Again, you own your spot. It’s up to you if you want to stand or sit. Yes, you should be courteous to the poor suckers behind you who didn’t follow rule #1 of parade etiquette, but then again you showed up early as you should have! Enjoy the reward for your smarts.

Ok, this might seem like I am being double minded. Yes, I said that you own your spot. You do. But I didn’t say it was OK to build a skyscraper in it so that the people behind you can’t see. By this I mean that it isn’t really fair for you to put you kids or mother-in-law on your shoulders so that they have a better view. Sure, they will get a great view. But everyone behind them will have no view at all. That’s not really considerate. Keep your kids earthbound.

Do you think other Disney guests ignore proper parade etiquette?