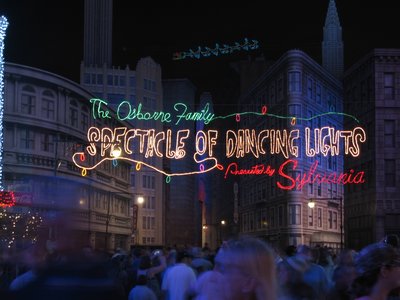 The story of Jennings Osborne is an interesting one – running from a little girl’s Christmas request to the US Supreme Court to Disney World.

The Story Of Mr. Osborne

Let’s start at the beginning.  Jennings was a successful businessman in Little Rock, Arkansas.  He became rich running a medical company.   He was a well-known philanthropist and was well connected, counting people like Bill Clinton and Mick Huckabee as friends.

Jennings Osborne owned a very large home in the middle of town.  In 1986, Jennings’s daughter Allison (whose nickname is Breezy) asked her father for a simple Christmas gift. She wanted to decorate the family home with Christmas lights.  Mr. Osborne complied, and strung up some lights.

Each year the Osborne Christmas light display got bigger.  And bigger.  It grew so much that he eventually purchased the properties on either side of his home and expanded the display.  By the early 1990s Jennings grew his display to include more than three million lights.

The display became very popular, brining visitors from all around and creating traffic jams on this street.  It was such a traffic and congestion issue that in 1993 several of Jennings’s neighbors filed a lawsuit.  They complained that it took them hours of fighting traffic to simply go to the grocery store, and that they were concerned that emergency vehicles wouldn’t be able to access their properties if there was a problem.  An Arkansas county court ordered that Jennings limit the display to 15 days and limited hours.   Jennings appealed first the Arkansas Supreme Court and eventually to the United States Supreme Court.   The US Supreme Court refused to hear the case.  In 1995, the state of Arkansas told Osborne to shut down the display completely.

Meanwhile, also back in 1995, the Disney MGM Studios (now known as Disney’s Hollywood Studios) was a young six years old.  It was doing very well, brining in guests beyond management expectations on its way to becoming the fifth most popular theme park in the United States.

Disney management was looking for a way to expand the Studio’s offerings for Christmas.   The company already hosted Mickey’s Christmas Party at the Magic Kingdom and Holidays Around The World and the Candlelight Processional at Epcot.  What could the offer at the Disney MGM Studios?

Bruce Laval, a VP of Theme Parks, saw a story on CNN about a Christmas display that had caused quite a ruckus.  It was the display of Jennings Osborne.  Bruce asked a Disney Show Director to check into the situation.  That Show Director, John Phelan, put a call into Osborne’s company and followed up with a letter.

Upon returning from his annual summer vacation, John had quite a surprise – a box of lights, newspaper articles, and cookies.  It seems that Mr. Jennings was a huge Disney fan and was very interested in seeing his Christmas light display get a new home at the Disney Hollywood Studios theme park. 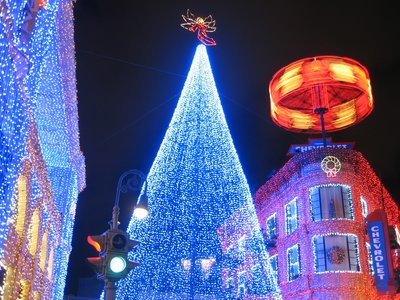 Disney technicians reviewed multiple sheds and many boxes of Christmas lights to determine how they could take this display and turn it into a nighttime show at Disney World.  They quickly came up with a deal with Osborne and he agreed to give the lights to Disney.  He didn’t want any money for the lights, but rather wanted an annual Christmas vacation for his family where he got to stay on-site and visit the display.  And he got exactly that – and in return we get Disney’s Osborne Christmas lights.

In early November 1995 four moving semi trucks were loaded up with the display and were on the way from Arkansas to Florida.

Disney employees worked 24 hours a day to get the display up for the first time in late November.  Disney guests loved it and Disney management made plans to make the display an annual tradition.  Over time they also expanded the display from three million lights to five million lights.

If you haven’t seen the Osborne Family Spectacle Of Dancing Lights at Disney’s Hollywood Studios, you are in for a treat.  It is made up of more than 10 miles of lights and 30 miles of extension cords.  Technicians start installing the lights each September, and the display operates from mid-November through early January.

Over time the display has moved around the park a bit and expanded.  In 2006 Disney added dimmer switches and choreographed the lights to Christmas music from artists including Trans-Siberian Orchestra, Barbara Streisand, and Elvis Presley.  That’s why we now have “dancing lights”.

Checking Out The Osborne Christmas Display

When you go, wait until about 30 minutes after the show begins before visiting the Christmas light display.  Many people wait in the Streets Of America area for the start of the show.  After the first 30 minutes they clear out and the area is not as crowded.

If you visit during the days between Christmas and New Years, know that you are showing up on the busiest days of the year.  There will be huge crowds.  Fortunately, the area that holds the Osborne Family lights is big and can accommodate a big crowd.

Sadly, Mr. Osborne passed away in 2011 from a heart ailment.  But thanks to a dad’s wish to give his little girl a Christmas light display and some Imagination by Disney World management, Jennings’s legacy will live on to delight Disney World visitors for years to come with a Christmas display that is becoming a holiday tradition for more and more families.