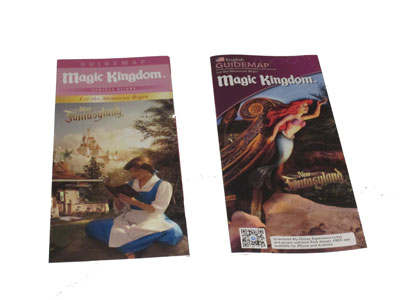 This is one of the biggest changes. Instead of the entrance to the park always being located at the bottom of the page, the maps are now oriented with north being up. So the Magic Kingdom map looks the way it always did, since you enter the Magic Kingdom at the south side of the park and head north toward Cinderella Castle.  But the Epcot map shows the main entrance at the top of the page, and World Showcase at the bottom. Disney’s Hollywood Studios shows the entrance in the top right.

Disney probably made this adjustment so that the maps more closely mirror online maps – especially those in the My Disney Experience mobile app. While cartographers everywhere might be rejoicing, this new layout will be confusing for fans that are used to seeing the maps with the old “enter at the bottom” orientation.

The layout of the guides features the map on the left and the legend on the right. The previous edition of the map had the map in the center with legends on both sides. This will probably make it easier to see the map without having to unfold the entire guide to its full width.

The cover of the guide has a photo of a key attraction from the park. The upper left corner very clearly calls out the language of the guide in words, with a flag, and with a color background. There is also a QR code to download the My Disney Experience app. The type used for the title of each park also varies and matches the park itself.

Win A Set For Yourself

Would you like a chance to win a set of the newly styled guide maps for the Magic Kingdom, Epcot, Disney’s Hollywood Studios, Disney’s Animal Kingdom, the Disney Water parks, Disney Springs, Disney Quest, and the Epcot Flower & Garden Festival Guide? I have five sets of these maps go give away. Enter our Guide Map contest.

Let’s look at the new features of the Guide Maps:

What do you think about the new Guide Maps?