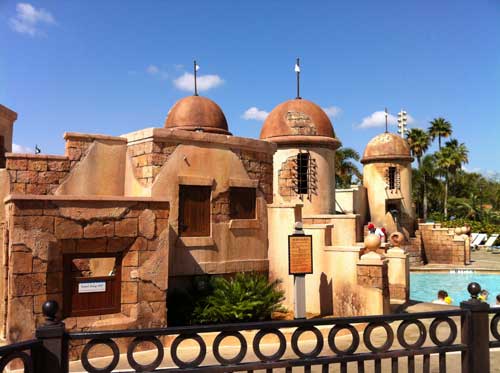 Disney World Moderate Resorts: The Rankings Are In

Disney World’s Moderate Resorts fall nicely in between the Value Resorts and the Deluxe Resorts when it comes to amenities, but there is a significant price difference between the Moderate and Deluxe Resorts, while the price jump is smaller between Values and Moderates.

Value Resorts are good for the budget conscious vacationer while Deluxe Resorts are for those willing to splurge. Moderate Resorts are still affordable enough that they are within reach of those who don’t want to spend a fortune on rooms but do want a few extra goodies.

The perks of spending a little more for a Moderate Resort may help with your decision to skip the Values in favor of the Moderates. If you’re not sure that you’ll get your money’s worth for the Water Parks and More Option, a Moderate Resort may be the way to go since the pools are much nicer and better themed than those at Value Resorts. You’ll also find table-service restaurants and more entertainment at Moderate Resorts that the Values just don’t have.

The Moderate Resorts are all very nice, so ranking them is difficult. Which resort is best may depend more on your personal preferences, like whether you want a large resort just waiting to be explored or a smaller resort with a more intimate setting.

Either way, let’s take a look at my ranking. Then you can make your own conclusions!

The Fort Wilderness Cabins receive honorable mention and are placed last on our list because they are listed as a Moderate Resort on Disney’s website but are priced much higher than the other Moderate Resort hotel rooms and approach Deluxe pricing.

The Cabins are fun in their nostalgia; they are one of the few original places to stay on property, and their natural theming makes you feel like you’re going back to your roots. However, there are enough amenities that you won’t feel like you’re roughing it.

If you are travelling with a large party and the Art of Animation Value Resort Family Suites aren’t your thing but the Deluxe Villas are too pricey, this might be a good alternative. You’ll find several outdoor entertainment options including fishing and boat rentals with plenty of room for your whole family.

As we’ll discuss later, Port Orleans- French Quarter used to be its own resort until it acquired Dixie Landings in the early 2000s.

This is the most compact Moderate Resort, but the intimate setting is nicely themed as a romanticized view of New Orleans. The fountains and wrought-iron fences offer beautiful settings to be explored by land or by water with bike, boat, and watercraft rentals or a carriage ride, all of which are shared with Port Orleans- Riverside.

Disney’s Coronado Springs features neutral theming and color scheme, but it is still distinctly Disney. Since this resort is considered a Convention Hotel, there are better amenities but with more subtle hints of Disney than other Disney resort hotels.

Coronado Springs has arguably the best bedding on property, and the pool area is also incredible with a fun Mayan Ruins theme and a slide. There’s even a hot tub and sand volleyball court.

It is one of the largest resorts, but there are several bus stops and internal transportation. On the upside, you won’t have to walk very far to catch a bus to a park or your hotel room; but the downside is that it takes a while to get out of the resort especially if you jump on at one of the first stops.

Formerly Dixie Landings, Port Orleans-Riverside combined with Port Orleans- French Quarter shortly after the tourism dip in the early 2000s. This acquisition was planned before that though reportedly because the name and backstory of the cotton plantation was considered offensive. When Dixie Landings first opened in 1992, it was themed like the Antebellum South with formal garden parties and mint juleps. In 2001, the cotton mill was removed along with all negative connotations of slavery and Pre-Civil War when Dixie Landings combined with Port Orleans creating two sections: Alligator Bayou (French Quarter) and Magnolia Bend (Riverside).

Port Orleans- Riverside features manicured gardens and mansion-like buildings, still giving a nod to the Deep South without the negative connotations. These beautiful grounds can be explored by taking a romantic stroll or renting surrey bikes. The intimate setting of the resort and the sprawling size means little to no crowds, so you’ll feel like you’re completely alone especially in the early morning and late-night hours.

The entertainment that Yehaa Bob provides at the River Roost bar is akin to the dueling pianos at Jellyrolls, and the well-themed and delicious dining at Boatwrights and the Riverside Mill Food Court will keep you coming back for more throughout your vacation.

Port Orleans really gives you the theming of a Deluxe Resort with the pricing of a Moderate, which makes it a close number two on our list!

Disney’s Caribbean Beach Resort is the oldest Moderate Resort on Property, but it was recently modernized during a yearlong overhaul. It is also the largest resort on property. With its bright, tropical theming and lush greenery, some have compared it to Disney’s Deluxe Resort, Polynesian Village.

This huge resort features the architecture of the Caribbean split into five locales: Trinidad, Martinique, Barbados, Aruba, and Jamaica. These areas surround a 45-acre lake, which provides plenty of areas to sit and relax or get in your morning jog.

Old Port Royale has several dining options including the table-service restaurant, Shutters, and Market Street Food Court, an arcade, and a gift shop as well as the main pool with Banana Cabana pool bar, and a marina where you can rent boats and bikes. Don’t let its size scare you- Disney runs internal transportation to each of the villages, the Custom House, and Old Port Royale, so you’ll never be too far away from anything at the resort.

Because of its huge size and extensive dining and entertainment options plus the recent overhaul, Caribbean Beach tops our list.

Have you stayed at a Disney Moderate Resort?  Which is your favorite?