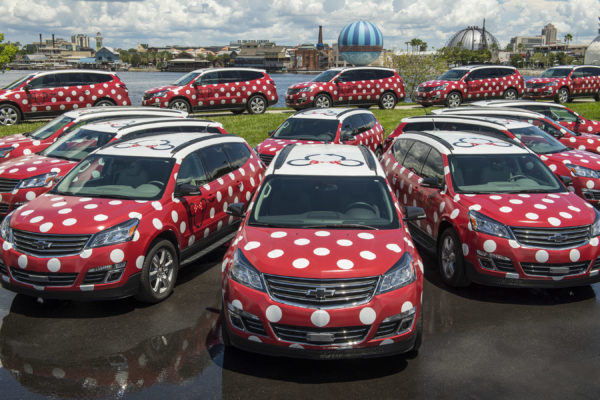 Starting later this month at DisneyÕs Boardwalk Resort and DisneyÕs Yacht & Beach Club Resorts, the Minnie Van service is a whimsical, point-to-point transportation service that will help Guests get around Walt Disney World Resort in a jiffy. Guests can order their own private Disney vehicle right from their smartphone and a Disney Cast Member will drive them wherever they want to go around Walt Disney World. (David Roark, photographer)

Usually when Disney announces something especially at a D23 Expo, we expect to have to wait a while to reap the benefits. While Disney was planning the new transportation service for some time, they announced the Minnie Vehicles in July and were functional within weeks!

Let’s take a look at this new ride service.

1. What are Minnie Vehicles?

2. How many people can they carry?

Each car holds up to six passengers and is even equipped with two car seats in case you’re traveling with little ones. They also have handicap accessible vehicles available upon request.

You can all for a Minnie Vehicle through the existing Lyft rider app. You can also use the app to make special requests like a handicap accessible vehicle.

The driver will take you anywhere you want to go on Disney property.

5. Are the vehicles available during certain times?

Yes. Unlike traditional Lyft cars, Disney’s Lyft Minnie Vehicles are only available between 6:30 AM and 12:30 AM. This is before anything really opens in the morning and after most things have closed for the night, so you shouldn’t have a problem getting where you need to go when you need to be there.

6. Why would I use a Minnie Vehicle instead of traditional transportation options?

First, this service virtually eliminates the need for a rental car for guests staying at these resorts. Hopefully this service will expand soon to other hotels and to the parks so you’ll have even more reason not to get a rental car, which I never recommended before anyway.

Second, these vehicles offer point to point transportation. You order the car, tell the driver where you need to go, and they take you there. There are no extra stops in between or waiting on other guests. This is especially convenient if you have Advanced Dining Reservations at another hotel or in the parks early in the morning.

Third, transportation up to this point focused on moving guests between the hotels and the parks. Even those who want to go to Disney Springs have a couple stops in between. The monorail is a fun option, but it takes a while especially if you have to stop at the Transportation and Ticket Center.

7. I heard Lyft recently added Taco Bell stops to their app. Can I use this service with the Minnie Vehicles?

No. The Minnie Vans are owned and operated by Disney World and they do not go off property.  There is no Taco Bell on Disney property.  This is partly a business strategy. They’re trying to keep guests on property as much as possible. Not only will these vehicles not take you to Taco Bell, but they also won’t take you to Universal Orlando or Sea World, two of Disney World’s biggest competitors.

8. I’d really like some Taco Bell. Can I still request a regular Lyft on property?

Sure! Regular Lyft cars and even Uber cars still function on property as they did before. They will pick you up anywhere and take you anywhere you need – or want – to go.

9. How much does the Minnie Vehicle cost?

The Minnie van service is part of Disney’s upsell category, so it’s not included like other transportation is. A ride in a Minnie van costs a flat rate of $20.

This is more than you’ll pay for a traditional Lyft of Uber, and since they’re only available from some of Disney’s most expensive hotels, at least for the time being, it’s obvious that Disney is targeting more affluent guests who are willing to pay for convenience and time-saving opportunities.

10. What is the future of Minnie vehicles?

That’s hard to say. I don’t have a crystal ball, and I’m not sitting in Disney’s boardroom (as much as I would like to be!).

As with other new features Disney offers, it is possible and likely that they’ll expand this service if it’s successful in the early days. Lyft’s co-founder, John Zimmer, has a background in hospitality, and Disney wants to do everything they can to make their guests happy. This means making things as easy as possible. Both companies, though in the hospitality industry, are also business-minded. Expanding their service means more money for everyone involved, and that’s good business.

There’s also no reason that a company like Uber, which has had some serious organizational issues recently, couldn’t join up with another theme park giant in the area like Universal to offer a similar service. If this happens, you can be sure that Disney will compete accordingly.

Ride anywhere on property for $20 in a Disney Minnie Van:  Good deal?