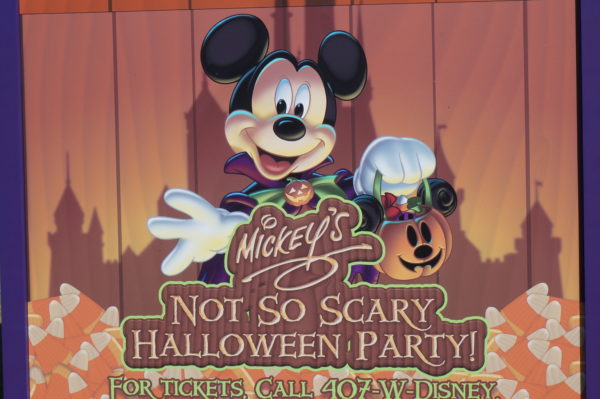 Mickey’s Not So Scary Halloween Party 2019

Kids are getting ready to go back or already back to school, which can only mean one thing: Halloween is just around the corner! Disney World starts the party early so there’s plenty of time for everyone to celebrate!

Magic Kingdom is decorated in warm fall colors, and Mickey’s Not So Scary Halloween Party kicked off this weekend and has dates scheduled into November!

I had a chance to check out the party courtesy of the nice folks at Disney Media Relations, so today we’re going to take a look at the details for the party including the dates, pricing, and some activities included in the party!

The party is the same every night!

These prices reflect the $10 savings on pre-purchased tickets. Tickets purchased on the day of the party will cost more.

This pricing seems steep, but keep in mind that you do not need regular park admission to attend the party, and since you can get into Magic Kingdom as early as 4pm (2PM for Disney Vacation Club Members) and the party doesn’t start until 7 PM, you’ll get plenty of time in the park. Plus, the party limits crowd numbers, so you can see and do more in a shorter amount of time than you could typically do all day! Make your FastPass+ reservations between 4 and 7pm then enjoy the party starting at 7!

One of the best parts of visiting Disney World during Mickey’s Not So Scary Halloween Party is that guests of all ages can dress up in costume! Disney’s year-round “no costumed guests over age 14” does not apply during the party! Guests 13 and younger can dress up all year. During the Halloween Party, even adults can dress up, although there are some rules that are still applicable including no masks, no objectionable or offensive material, and no excessively torn clothing. You’ll still have to go through security, so Disney discourages any bulky clothing as well.

It wouldn’t be Halloween without Trick or Treating! During Mickey’s Not So Scary Halloween Party, guests of all ages can Trick or Treat on Magic Kingdom’s Main Street USA! Collect candies, sweets, and treats. If you or someone in your family has a dietary restriction or allergy, you can request a non-food item or a healthy item at any Trick or Treat location.

Head over to Frontierland anytime during the night, and you might see the Cadaver Dans (the Halloween version of the Dapper Dans). They crack jokes and sing songs – some Disney Classics and some other familiar songs.

The Boo to You parade is definitely a highlight of the party! The Headless Horseman starts the parade with a ride through Magic Kingdom. The parade starts in Town Square then heads down Main Street USA, around the Cinderella Castle Hub, through Liberty Square, and ends in Adventureland. Get your spot along the parade route early because it fills up quickly.

You don’t want to miss your chance to see Mickey and Minnie in their new Halloween costumes, the Hitchhiking Ghosts, and new this year, the Spectral Bride surrounded by waltzing spirits in honor or Haunted Mansion. Other floats include The Incredibles with Edna Mode followed by Buzz Lightyear with alien explorers and Wreck it Ralph and Vanellope von Schweetz for Tomorrowland, Pirates for Advenureland, and Clarabelle Cow for Frontierland. The parade wraps up with a Fantasyland-inspired grand finale with some of your favorite Disney Villains.

The Hocus Pocus Villain Spelltacular is the party’s stage show. In this frighteningly fun show, the mischievous Sanderson Sisters from the classic Hocus Pocus movie along with the help of other Disney Villains including Dr. Facilier, Oogie Boogie, and Maleficent mix up a spritely potion to cast a spell on everyone in Magic Kingdom. Complete with dancers and visual projections, this is show is not one you’ll want to miss!

Disney’s Not So Spooky Spectacular

Wrap up the night with Disney’s Not So Spooky Spectacular, the new fireworks show exclusively available at Mickey’s Not So Scary Halloween Party! In true Disney style, this “fireworks” show is so much more than that! Disney’s Not So Spooky Spectacular, hosted by Jack Skellington, follows Mickey, Minnie, Donald, and Goofy into a mysterious haunted house complete with dancing skeletons, waltzing ghosts, and Disney villains. You’ll soon find out that anything can happen on Halloween!

Cruella’s Halloween Hide-A-Way a special dessert party at Tony’s Town Square Restaurant hosted by Cruella de Vil herself! This party includes more than just desserts though. Guests can enjoy unlimited Hors d’oeuvres, fondue, bread, and of course desserts plus reserved seating for the Boo to You parade. This party within a party starts at 9pm and costs an extra $99 per person.

Mickey’s Not So Scary Halloween Party: what’s your favorite part?