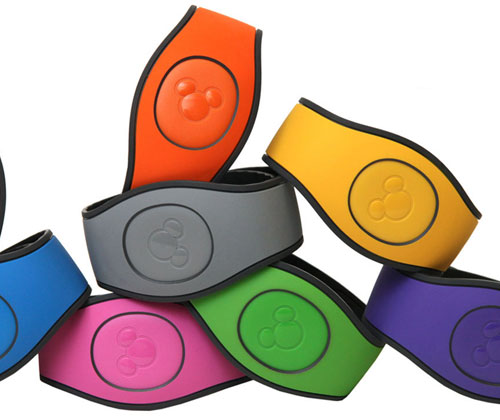 When Disney released the MagicBand in 2013 as part of its billion-dollar RFID project, it was an instant hit. In just two years, ten million MagicBands had been distributed. Guests loved that this one wearable device gave them access to their Disney Resort Hotel room, park tickets, PhotoPass photos, FastPass+ reservations, Advanced Dining Reservations, and it worked as a payment option.

MagicBand changed how people vacationed in Disney World, and it looks like the revolutionary idea is about to add some new features.

When Disney unveiled their new band on November 19th at the Destination D D23 event, they said that they continue to think of ways to “innovate and personalize” the Walt Disney World experience.

Although the new MagicBand will be larger than the original, Destination D attendees say that the new band is lighter and more comfortable, and it feels like wearing a watch. It is also said that the battery will last longer in the updated version.

They also say that the new design is more flexible making it easier to fit around your wrist and stay there. The rigidity of the original design meant that it would often pop open making it easy to lose. In fact, some entrepreneurial Disney fans developed a kind of rubber band that would slide over the snap and hold it in place.

Other than those improvements, the new MagicBand retains all of what you love about the original. It will still link to the MyDisneyExperience app and provide all of the functions mentioned above and more.

One of the things guests love about MagicBands is the ability to collect special edition bands. Disney releases collectible bands for Epcot‘s International Food and Wine Festival, Epcot’s Flower and Garden Festival, and special holidays like Christmas, the New Year, and Halloween.

You can rest assured that this will still be an option because of the third new feature below.

The most revolutionary change that Disney made to MagicBand 2 is that they made the RFID chip removable. There are two screws on the back of the MagicBand that allow the chip to be removed, so you won’t lose the disk.

Because of this removable disc, your MagicBand experience will now be more customizable.

For those of you who don’t like to wear the band on your wrist, you’ll now be able to remove the disc and pop it into a variety of other accessories like key chains, which were revealed at the Destination D Event. You could also just put it in your pocket!

While other customizable options haven’t been announced, it’s not unreasonable to assume that there will be even more options. How about a Disney Dooney & Burke band, a Disney Coach band, or a Disney Vera Bradley band? Why not? Disney already has these relationships established, and they know that fans of these brands will pay extra for it.

Disney has already used MagicBand to bid adieu on It’s a Small World, deliver meals at Be Our Guest, and add PhotoPass photos and videos on attractions like Seven Dwarfs Mine Train.

Again, this isn’t something that Disney has announced, but we can assume over time that they’re going to use the available technology to its fullest. Mickey and other characters might call you by name. Perhaps a Droid will ask you to trade something with them. Maybe a Cast Member will sing Happy Birthday to you or be able to suggest souvenirs based on your previous purchases. A server might be able to make recommendations based on what you’ve ordered in the past. The opportunities are nearly endless, and with Disney’s creative Imagineers, who knows where they could take this?!

Disney is famous for announcing something and making us wait for months or even years. However, they’ve confirmed that MagicBand 2 will be released very soon.

In fact, they’ve already started mailing them out to Annual Passholders, and Disney Resort Hotel guests will start receiving them in January 2017. You’ll be able to purchase them in retail locations in January as well. The accessories, like key chains, will also be available at this time.

Are you excited about the Disney’s MagicBand 2?