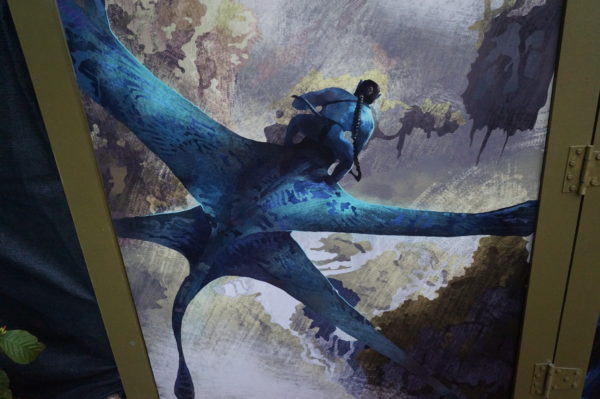 Disney CEO, Bob Iger announced that Pandora – The Land of Avatar will finally open on May 27, 2017. That’s just a few months away! This highly technical land is the most ambitions addition to the Disney World theme parks since 2012 when New Fanstasyland opened in Magic Kingdom.

With stakes higher than ever, Disney is hoping that Pandora will be a hit. Attendance has been down for the past year, and the company is counting on the expansion at Disney’s Animal Kingdom to be wildly successful.

The problem is that Pandora seems like a distant memory. The first (and currently only) Avatar movie premiered almost a decade ago.  Although it was a huge box office hit then, it’s hard to tell whether people will remember the movie enough to motivate them to visit the area much less actually understand it.

Disney is doing a few things to combat these concerns. Let’s take a look at three ways that Disney is promoting Pandora.

First, Pandora isn’t the only thing opening in Animal Kingdom. While it’s 10 months late, Rivers of Light is finally open to the public. The first public show was February 10.

Technical issues plagued the opening scheduled for last year, and the placeholder barely justified the park being open after dark. Now, Rivers of Light makes Animal Kingdom a permanent fixture in the evening hours.

Disney is banking on guests visiting Animal Kingdom to see Rivers of Light and wandering through Pandora as well.

There’s no backstory behind this show, so guests come, watch, and leave. There’s no movie or book that they need to be familiar with to understand the show.

That is a drastic difference from Pandora. Avatar is a sophisticated story with deep characters and meaning. While you can enjoy the land without being familiar with the movie, you won’t appreciate it or understand it fully.

Part of the complication with this is that Disney doesn’t own the intellectual property; James Cameron does. They’re not even the studio that published it; that would be Fox. It’s difficult to educate guests and potential guests when you really have no interest in a movie upon which you built a land.

With that being said, Disney does have the right to promote their parks, so they’ve created a website: visitpandora.com. This page tells visitors about the vast Avatar lore and acts like a visitors’ guide for “Explorers, Adventurers, and Scientists.”

The page is helpful since most people have forgotten about movie and characters. It tells of some of the adventures guests will take including walking through a forest of floating mountains and bioluminescent plants. Guests will also get to explore the Kaspavan River and feel what it’s like to ride a mountain banshee.

If that isn’t the stuff of adventure, I don’t know what is. Whether you like the movie or hated it, remember it well or forget it completely, or you just never saw it, you’ll probably want to explore Pandora in Animal Kingdom now!

Another saving grace for Disney is that James Cameron is planning to release another movie sometime in 2018. When the last movie broke the box office in 2009, Cameron and his team started working on a sequel right away. Disney knew this when they made the deal to build Pandora back in 2011.

If Avatar 2 is even close to as successful as the first movie, Disney will be welcoming a new generation of fans to their new park. It’s also been rumored that Cameron doesn’t plan to stop at just one sequel. This is good news for Disney, Pandora, and Avatar fans everywhere.

Pandora – The Land of Avatar: is the story already forgotten?