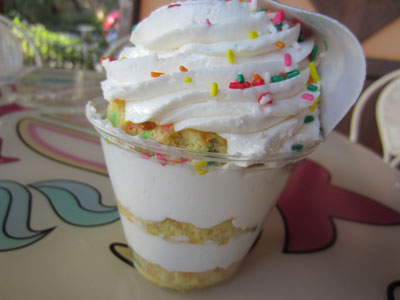 In recent years, Disney has been coming up with some inventive food offerings.

These include things like the new favorite in Fantasyland, LeFou’s brew, which freezes apple juice into a delicious concoction.

Then there are the cupcakes. One that immediately comes to mind is the King Cupcake at Disney’s Pop Century Resort, which includes peanut butter icing and candied bacon. Another is the budget-busting $9 cupcake for sale at Starring Roles in Disney’s Hollywood Studios. Then there are the more common, but still delicious, choices like the chocolate covered coconut cupcake at Contempo Café (I think I just like the use of so many “C”s when saying that).

Each of these cupcakes costs $4.19.  While these are all delicious indulgences, they aren’t really groundbreaking. They provide a nice treat, but don’t really solve a serious food problem.

Disney has finally fixed the age-old problem with cupcakes.

What problem is that, you ask?

It’s the fact that cupcakes have too much cake and too little frosting. Now, finally, Disney has fixed that issue.

Like so many breakthroughs, the solution seems so simple now – yet nobody thought of it before. At least nobody that I know about.

This cupcake breakthrough is available at the Cheshire Café in the Magic Kingdom. If that doesn’t ring a bell, it’s because this little café is easy to overlook. It’s located across from the Mad Tea Party, and is on the border with Tomorrowland, not far from Cosmic Ray’s Café.

Historically known for cereals, fruit, and assorted drinks, it was very easy to pass by the Cheshire Café without a second look. There wasn’t really anything special that would draw you to pay this café a visit.

The Mat Hatter Cupcake definitely tastes like coffee, and is then is complimented by dark chocolate shavings and chocolate straws. Just like its vanilla cousin, it has layers of cake and frosting. Nice.

The frosting in both cupcakes is light and fluffy, like a mousse, and it is definitely sweet.

While some might say that these are simply good old parfaits, I like to think of them as technologically advanced and groundbreaking cupcakes.

Would you like a cupcake that has more frosting than cake?