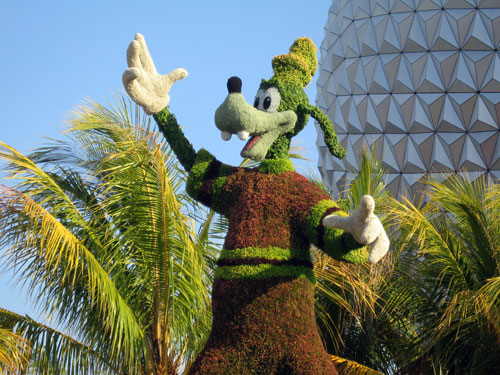 The horticulture at Disney World really sets the scene and also contributes to the theming of each Disney World Park. For example, Disney’s Animal Kingdom has two important areas dedicated to horticulture: Oasis and Kilimanjaro Safari. Magic Kingdom uses landscaping to transport guests into different lands like the exotic, lush jungles of Adventureland and the arid climate of Frontierland complete with dry, sandy areas and cacti.

These areas can be seen year round, but the Flower and Garden Festival at Disney’s Epcot is a special event that takes place annually in the spring. It is one of the largest outdoor flower festivals in the world. In addition to the already amazing landscaping at Epcot, horticultural specialists plant several thousands of new flowers and other plants every year to welcome spring with a vibrant and fragrant display.

Disney is clearly devoted to making their theme parks beautiful and environmentally friendly, but just what does this work amount to? Let’s take a look at some numbers.

Disney Land by the numbers

30,000 acres of conservation lands and green space that will never be developed

7,500 acres of land set aside and named Wildlife Management Conservation Area by Walt Disney himself

12,000 Acres of wetlands that have been restored or enhanced since the 1970s

Disney Plants by the numbers

3,000 different species of plants from the US and 50 foreign countries

As of 2003, Disney employed 600 specialists to maintain the landscape, 30 of which are in the Disney World Nursery full time. These people work tirelessly to maintain the beautiful grounds that we often take for granted.

Part of maintaining the health, beauty, and cleanliness of Disney’s landscape is controlling both good and bad pests. According to a 2003 interview with National Geographic, Disney Pest Management uses insecticidal soap sprays, dormant oils, and Bacillus thuringtensis (Bt) to control harmful pests like aphids, mealybugs, whiteflies, mites, and caterpillars. These bugs like to eat the beautiful plants and might even harm them to the point that entire beds would have to be replaced. On the other hand, Disney also uses beneficial insects to control the harmful pest population and even benefit the plants. In fact, Disney released 10.5 million beneficial insects in 2002.

Do you love the horticultural magic you see everywhere at Disney World?