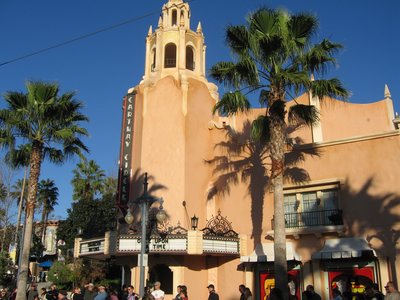 Many Disney fans have often wondered how Disney’s Hollywood Studios has evolved into the park that it is today. In the previous installment we looked at how the concept for Hollywood Studios began as an Epcot Pavilion.

Also, because of Michael Eisner (the Paramount man with infinite amount of contacts in film), Disney decided to beat Universal to the punch and build a park that focused on the golden years of film making. This park, a glorified version of the Hollywood truth, was initially developed to be a half-day park.

The Disney/MGM Studios was a popular, well-traveled park, one that completely exceeded all expectations. What was once billed as a half-day experience was quickly becoming a full-day attraction, and one that was becoming increasingly crowded.

Looking at a map of the park on opening day, it is easy to see how the park could be overcrowded and tight for guests. It was at this time that development and construction of the Sunset Boulevard area began.

In late 1992, early 1993, Disney began the expansion of the Studios that would include two new theaters for live shows, and a marquee attraction that would bring guests to the end of Sunset.

On July 22, 1994 Sunset Blvd. officially opened, with the ominous looking building looming at the end. This became known as The Twilight Zone Tower of Terror. Standing 199 feet tall (because 200 feet would require a red flashing beacon according to state law) and having its footprint at the end of Sunset Blvd, The Tower of Terror now draws guests down Sunset Blvd. to all of the added shops and shows, as well as The Rock N Roller Coaster, which opened in 1999.

While the expansion was beginning and construction was occurring, Disney was spending much time in litigation with its partner in the Studios, Metro-Goldwyn Mayer.

MGM had filled a lawsuit back in 1988 that claimed Disney was intending to use the park as a site for television and movie production. Though this was before the park even opened, it appeared that MGM was putting a plan into motion for the future. This came to a head when Disney counter sued MGM because of the creation of an MGM them park in Las Vegas. Obviously Disney was concerned with the connection guests would have between the theme park in Las Vegas, and the Disney/MGM agreement.

In October of 1992, a court decided that Disney could continue using the Disney/MGM name, but also allowed MGM to use their name and logo on the park in Las Vegas, as it did not share the same backlot theme. Disney was also forced to use a different name for the park in certain marketing campaigns based on the usage MGM had portrayed. In those instances the park was referred to as either the Walt Disney Studios or simply The Disney Studios.

Ironically, the MGM Grand Adventure Park in Las Vegas closed in 2000, while Disney was still using the MGM moniker.

The litigation with MGM has also caused issues with The Great Movie Ride. As the agreement with MGM stands today, the attraction can remain open with the MGM licensed films used in the attraction as long as there are no major refurbishments to the attraction (Source: WDW News Today Podcast). Because of this, Disney has been reluctant to make major changes to the attraction, and it remains stuck in its current state.

Another issue that has developed over the years within the parks is the Sorcerer’s Hat situation. Guests have been taking pictures in front of the Hat since 2001, as it became the parks pin trading headquarters. There have been thoughts that this was a calculated decision by Disney to replace the Earful Tower as the parks icon, because it was only visible on the Backlot Tour attraction. There seems to be major truth to the belief that the Hat was erected in its place for another reason, and once again it involves litigation and lawsuits.

When the park originally opened, the icon of the park was the Earful Tower. This truly was a problem for Disney as its lack of visibility from the entrance prevented its true purpose, to draw guests into the park. One way that executives chose to combat this situation was to use something else as the “unofficial” icon.

Unfortunately the agreement that the Disney Company came to with the owner at the time, Ted Mann, did not specifically allow for Disney to use the likeness of the building as an icon. They were allowed to sell apparel with the likeness and such, but only as it pertained to the attraction within.

As the park grew, the company began using the building and the attraction as the icon, and printed them on shirts, and used the footprint in cement ceremony to drive up attendance.

At the time it seemed that Mann was not opposed, as his company was floundering, and Disney was paying substantially. This changed in 2000.

In 2000, Ted Mann officially filed for bankruptcy, and sold the theater to a partnership of Warner Bros. and Paramount Pictures. This was worse case scenario for Disney as the partnership’s first order of business was to sue Disney for breach of contract. Because of this they required all sales of the likeness of the theater to be removed, the footprint ceremony to cease, and for a structure to be erected in front of the theater so that Disney could not longer profit from the building. As such, the Sorcerer’s Hat was erected, and there is no good way of seeing the theater from most angles.

Even though it seems that the park was mired in many activities in its second act that appeared more detrimental than helpful, Disney was able to build the reputation of the park.

Though Animation production ceased in the early 2000’s there have been major additions that have kept attendance up and guests returning.

In 1998 Disney created the Hollywood Hills Amphitheater to hold Fantasmic! an attraction of epic proportions. After the ending of Sorcery in the Sky Fireworks, Disney looked to add a nighttime attraction that would keep guests in the park. By creating Fantasmic! which was already successful in California, Disney was able to achieve their goal, as most nights guests are turned away from the 10,000+ seat capacity.

Disney also debuted Toy Story Midway Mania in 2008 at the newly dubbed Pixar Place, which has wait times of over 2 hours during peak times.

In December of 2012 The Legend of Captain Jack Sparrow opened in the former home of Journey into Narnia. Reviews are glowing as guests can join the crew of the Black Pearl.

All of this expansion as well as the Christmas time presentation of the Osborne Spectacle of Dancing Lights has kept the Disney Hollywood Studios as one of the most popular parks in North America (number 5, behind only Magic Kingdom, Disneyland, Epcot, and Animal Kingdom).

What do you think about the storied history of The Studios?