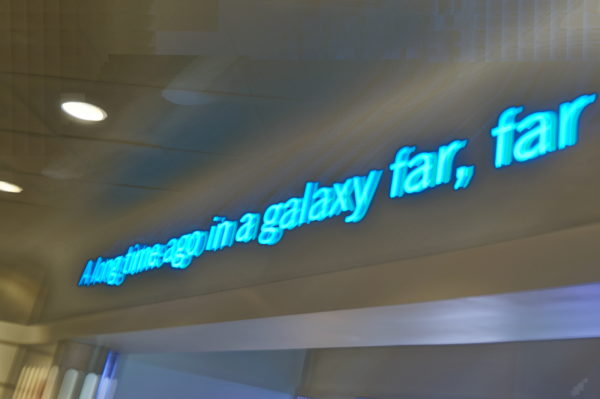 As you’ve probably heard, Disney is expecting massive crowds and extensive lines for the new Star Wars: Galaxy’s Edge in Disney’s Hollywood Studios when it opens in August of this year.

Disney World started issuing bathroom passes when Pandora – The World of Avatar opened in Disney’s Animal Kingdom. Flight of Passage typically has a two to three hour wait – even nearly two years after opening.  Disney started handing out bathroom passes that allowed guests to leave at least one member of their party behind while the others answer nature’s call.

If you have to go, just flag down a Cast Member, ask for a bathroom pass (which is a plastic placard about the size of a door hanger on a lanyard), and head out to do your business. When you return, head into the FastPass line where you’ll show a Cast Member your card. They’ll grant you access to this shorter and faster line where you’ll proceed through to a small waiting area at the point where the FastPass line joins with the Standby line. Once your party arrives at this location, you will reunite with them and head towards the main attraction. If your family has already past this point by the time you return, you’re out of luck!

This bathroom pass is not a pass to go wander the park while the rest of your family waits since you won’t get to ride if your family has already passed the point of re-entry. It has one purpose, and one purpose only, so don’t dilly dally!

Are Disney bathroom passes for long queues a good idea?