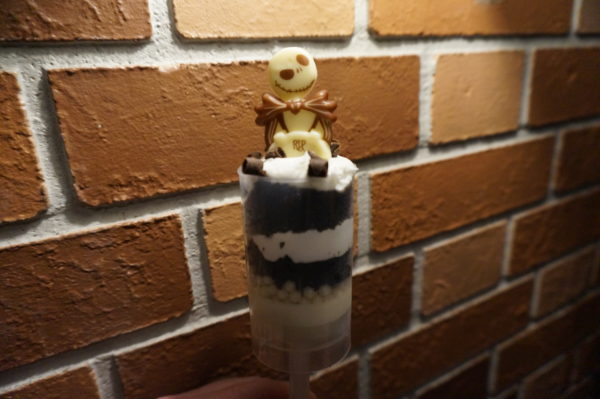 Tasty Disney Halloween Treats You Have to Try

Halloween is in full swing at Disney World, and that not only means decorations, but it also means some special dining additions. We all know that Disney has some great food, but did you know that they update their menus for special occasions and holidays?

And let me tell you: Disney knows how to do Halloween treats right!

I recently attended my very first Mickey’s Not So Scary Halloween Party (which was tons of fun!), and I made the sacrifice of buying and eating some of the special treats so I could show you what they look like.

There are several treats, although I only tried two, so let’s take a look so you can choose for yourself which ones to try.

Jack Skellington is a well-known Halloween character, so it’s only right that he has his own dessert, and it’s a really cool one, too. The vanilla panna cotta push pop has layers of chocolate cake, vanilla buttercream icing, white and dark chocolate crisp pearls, dark chocolate curls, and a white chocolate Jack Skellington on top. If you’d like to try this special treat, head over to Sleepy Hollow in Liberty Square.

It seems like we are entering a time of pumpkin flavored everything, and Disney has jumped on the band wagon with pumpkin ice cream. This cool treat is perfect for getting into the fall mood while dealing with the still very warm summer weather in Florida. Stop by the Plaza Ice Cream Parlor right on the corner of Main Street USA to try a scoop for yourself.

If pumpkin ice cream isn’t your thing, head over to Auntie Gravity’s Galactic Goodies in Tomorrowland where you can find Candy Corn ice cream.  It is basically vanilla ice cream with candy corn in the bottom.

Mickey waffles are delicious all year long, and I never though they could get any better, but Disney has infused them with pumpkin! The Pumpkin Mickey Waffle is topped with vanilla ice cream, whipped cream, sprinkles, and caramel sauce, and it’s only available at Sleepy Hollow. It’s certainly not breakfast appropriate!

The Haunted Mansion in Magic Kingdom is the center of all things Halloween, so it’s no surprise that there’s a snack with the Haunted Mansion theme. This cake is available at many different counter-service locations around the park including Aloha Isle, Liberty Square, Auntie Gravity’s Galactic Goodies, and Storybook Treats, and each location has a different flavor and theme.

Disney can make a cupcake into anything- seriously! This year, they’ve made a Mickey Halloween Cupcake. It’s chocolate cake stuffed with purple marshmallow fluff in the middle and topped with bright orange (but vanilla-flavored) buttercream icing and sprinkles. To finish it off, there’s a white chocolate scarecrow Mickey stuck inside. If this sounds like just your style, you can pick it up at the Main Street Bakery.

If it’s a little early in the morning for a cupcake, Main Street Bakery also has a Mickey shaped cinnamon roll topped with orange icing and a chocolate spider web. That’s a good breakfast, right?

If the fall season has you craving some cheesecake, Disney has you covered. Gaston’s Tavern in Fantasyland is serving up a Pumpkin Cheesecake Dome for a limited time. The cheesecake has a graham cracker streusel base, orange white chocolate glaze, and a white chocolate Mickey atop the cheesecake. This is also available at the Main Street Bakery.

Worms and Dirt is a classic kids’ dessert, so head over to Pecos Bill Tall Tale Inn and Café to get a bit nostalgic. This dessert has a Halloween twist though. It’s in the shape of a gravestone (made of chocolate cake and chocolate mousse, covered in chocolate glaze, and topped with Oreo crumbs and gummy candy). Now that’s a lot of chocolate!

Do you try the Disney Halloween Treats?