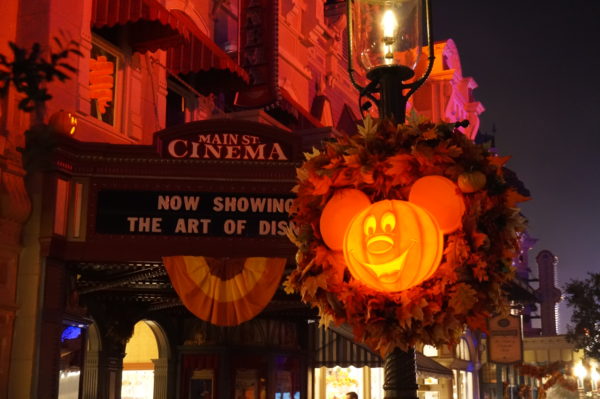 Mickey’s Not So Scary Halloween Party is back this year, and for the first time, it started in August. The first party was on the night of August 25th, and dates continue all the way through Halloween night on October 31st.

If you think Magic Kingdom is fun during normal hours, you have to experience it during the Halloween Party. After many years of visiting Disney World, I’ve finally made it to Mickey’s Not So Scary Halloween Party, and I’m here to report exactly what I saw – which was pretty awesome!

Let’s take a look at the events going on at the 2017 Mickey’s Not So Scary Halloween Party.

How Do They Do It?

I’ve always wondered what prevented day guests for just hanging out in the park, and “crashing” the Halloween party without paying for the separate ticket.

If you attend the Halloween party, you need to purchase a separate ticket specifically for the party date you will attend.  After you scan your ticket and enter the park, a Cast Member will give you a special wrist band.

After the park closes to day guests, Cast members are stationed a “transition points” in the park, checking that guests have wrist bands.  For example, a line of Cast Members spanned the walkway from Tomorrowland to Fantasyland, near Cosmic Ray’s.  They asked every guest walking by to show their party wrist bands.  If you didn’t have a wrist band, they asked you to head to the park exit.

Boo to You Parade

Magic Kingdom is no stranger to fun parades, but the Boo To You Parade is something special. It only happens during Mickey’s Not So Scary Halloween Party – technically, Disney presents it twice during every Halloween Party.

First, the parade is normally led by the Headless Horseman, who is one of the rarest characters in Disney World. Sadly, I didn’t get to see the Horseman.  It was a rainy night, and it wasn’t safe for the horse, rider, or crowd.

If you’re planning to attend the Halloween Party, I suggest viewing the parade from the Central Plaza or from Frontierland.

Also, if you can stay for the later presentation, it will be less crowded.  Go do some other events while the first parade takes place.

A night in Magic Kingdom isn’t complete without fireworks, and HalloWishes fills that need. The 12-minute show takes place over Cinderella Castle starting with the Ghost Host from the Haunted Mansion inviting you to partake.

The fireworks are pretty incredible, as Disney fireworks are, but it’s the haunted melodies that really make the show festive.

Disney only presents the fireworks show once each night, so be sure to check it out.

The Sanderson Sisters from Hocus Pocus are back this year along with some other Disney Villains who, together, cast a spell on guests in the park.

This was mostly rained out too, but I’ve generally heard great things about the show.

One of the coolest parts of Mickey’s Not So Scary Halloween Party is that everyone can dress up in costume. During normal hours, only kids can dress up, but Disney allows the whole family to dress up for this special event.

Wear your favorite costume and trick-or-treat throughout the park, but you might want to wait until the end of the night to collect a bit of candy since it take a lot of time and there are so many other events going on that are exclusive to the party.

If you do decide to go trick-or-treating and someone in your family has a food allergy, pick up a teal treat bag, which will tell the Cast Members passing out the treats that you need allergy-friendly treats. They’ll give you a teal token instead of a piece of candy, and you can go to the Allergy-Friendly Centers to receive special treats that are safe for your specific food allergy.

The candy is pretty standard, but there is something fun – even as an adult – in getting “free” candy (yes, which you paid for as part of you ticket).  From the strict perspective of getting a good value for your time, I would suggest buying a $4 bag of candy at your local drug store.  However, from the perspective of having fun, I would suggest checking out at least a few candy stations.

Lots of people ask why you would pay extra to go to Mickey’s Not So Scary Halloween Party. One answer is because of the unique character appearances. Some characters appear on the stage during shows, others in the parade, and others will actually meet and greet guests during the party.

Dr. Facilier from Princess and the Frog, Oogie Boogie from The Nightmare Before Christmas, Maleficent from Sleeping Beauty, Ursula from The Little Mermaid, Cruella de Vil from 101 Dalmatians, Jafar from Aladdin, and other Disney Villains appear on stage, in the parade, and in special meet and greet locations around the park.

You’ll also want to find the Cadaver Dans Barbershop Quartet. They’re a lot like the Dapper Dans found on Main Street USA during regular park hours, but these guys are undead! They’ll sing, tell jokes, and answer your questions in puns. If you’re looking for them, check out Frontierland.

There are also special PhotoPass locations with themed magic shots at the Magic Kingdom Entrance, the Haunted Mansion, Town Square, Main Street USA, and Liberty Square. If you plan to take advantage of these special shots, be sure to get the Memory Maker, which works the same way during the party as in normal hours, so you can get all your photos.

Another good reason to visit Magic Kingdom during Mickey’s Not So Scary Halloween Party is that the crowds are lighter than normal, so wait times on even the most popular attractions are shorter. Here are the attractions that are expected to be open during, which can change depending on availability.

In Adventureland, The Magic Carpets of Aladdin, The Pirates Of The Caribbean, and Swiss Family Treehouse will be open for guests to enjoy.

In Fantasyland, The Seven Dwarfs Mine Train, Prince Charming Regal Carousel, it’s a small world, Peter Pan’s Flight, The Many Adventures of Winnie the Pooh, Mad Tea Party, and Under the Sea – Journey of the Little Mermaid will welcome guests wanting get away from the spookiness for a bit. Nearby Storybook Circus will open Dumbo the Flying Elephant and The Barnstormer.

So is it worth buying a special ticket to attend the Halloween party?

If you are a big Halloween fan, you will really enjoy the special offerings – the parade, fireworks, castle show, and candy.  If you are an adult and like to dress up, this is your big chance as well.

If you’ve think you’ve seen and done it all at Disney (maybe you are a local, or a frequent visitor), but you haven’t attended the Halloween party, you should do it – at least once.  The park looks and feels different, and you can only see the parade and fireworks during the party.

If you are looking for a safe alternative to trick-or-treating in your home neighborhood, Mickey’s Not So Scary is a good option too.

Overall I enjoyed the party quite a bit.  I happened to go on a rainy night, so I feel like some of my time was washed out.  Disney can’t be blamed for that.

In the end, I felt like the time at the party went by very quickly and that I didn’t have enough time to see and do everything.  The party ended, and I was still wanting more.  I guess that is the sign of a good party.

Mickey’s Not So Scary Halloween Party: Worth the extra ticket?