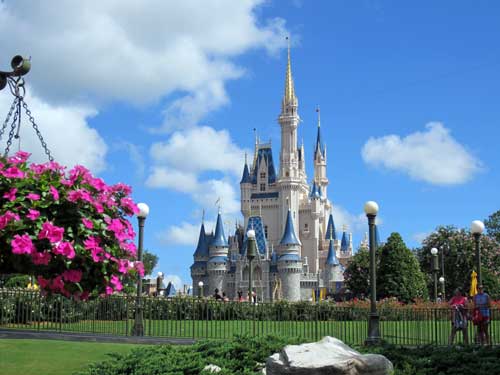 Disney Guests Get The Best: Just Consider Those Other Amusement Parks

My husband and I live in Pennsylvania, but we are die-hard Disney fans. We recently visited a local theme park, which I will not name, and I couldn’t help but compare our experience to our Disney vacations.

Even though we’ve together for 15 years, this was the first time that we’d visited a non-Disney amusement park.

As we walked through the park, I got to thinking: Disney guests are spoiled.

Read on then let me know what you think.

Sure, a Disney vacation is expensive, but I’m not talking about booking a flight, renting a car, and making hotel reservations and Advanced Dining Reservations. I’m talking about the simple cost of admission.

We had some discounts through our employer, so we were able to save a few dollars, but if we didn’t have these discounts, we would have paid almost $50 per person just to enter the park. Once inside, there were several attractions that required an additional purchase. If we did everything the park had to offer, we could have easily spent over $100 just on admission.

As of this writing, a one-day admission ticket to Magic Kingdom costs up to $114 with the new variable pricing schemes, but can be as low as $97. This price will quickly drop if you purchase more than one day and can even go as low as $40 or so for a 10-day pass! That’s four parks for less than we paid for one!

There is so much to see and do in Disney that even ten days wouldn’t be enough. Four parks, two water parks, hundreds of restaurants, and even more stores would keep even the most on-the-go person busy for days!

Our local park struggled to keep us busy for an entire day.

At Amusement Park X, we watched a live band perform around mid-day. They were good enough, but one of their microphones didn’t work and the music, which they controlled themselves from a small soundboard, was way too loud to hear them singing.

At Disney World, there are literally hundreds of people behind the scenes controlling each and every detail to make sure that it’s perfect. They hire only the best entertainers, performers, and singers to put on their stage shows, and they practice tirelessly so it’s right every time.

I know that Disney is much larger than the park we visited, but this park is owned by an international amusement park company; it’s no little mom and pop park.

What’s more, the whole park was full of games like shoot the bottle, ring the bottle, get the ping-pong ball in the cup, and more. People were paying lots of money to play these games that have been proven nearly impossible to win. Disney does have an area called Dinoland USA in Disney’s Animal Kingdom themed like the classic funfair, but it’s more a parody.

Disney food is amazing; there’s really no denying that. Sure, it’s a little pricey, but think about what you get. Even at quick-service restaurants, you’ll get full meals, some of which are large enough to share, for under $15. The food is good quality, healthy, and quite tasty!

Our most recent experience at the local park found us paying almost $25 for a meal of chicken fingers, a small (and I mean SMALL) order of French fries, a grilled chicken sandwich, and one drink that we shared. The drink was over $3, and we later found out that there were no refills!

We were not satisfied.

Disney prides itself on staying clean. In fact, there are underground trash shoots that carry trash to a collection facility where it’s sorted and disposed of. What’s more, Cast Members, no matter their position, are supposed to pick up any trash that they see and dispose of it in the closest receptacle. You will hardly ever see trash lying around Disney World. To be sure of this, Walt observed people and counted how many steps, on average, they would take to get to a garbage can. He determined that people would take 30 steps, so most receptacles are no more than 30 steps apart.

Although Amusement Park X was clean enough, it was pretty difficult to find garbage cans, and there were many visible roofs with garbage and coins tossed on them. “Why doesn’t maintenance clean this up?” I thought to myself, “This would never happen in Disney World!”

Another thing that would never happen in Disney World is chipped or dirty parts of an attraction. In one attraction in the amusement park, I noticed that the foot of one of the animatronics was obviously chipped. The ride looked rundown and unkempt.

And then there’s the 3-D glasses. They were wet when I pulled them from the basket. Were they clean?! Who knows! My yuck-ometer was peaking. Disney has a huge facility that sterilizes every single pair after just one use.

I was confused. There seemed to be no rhyme or reason as to how the park was laid out. I even had a hard time finding the entrance for several of the attractions.

Disney, on the other hand, has lands that are themed and you know when you’re leaving one land and going to another. The attractions make sense, and there’s a story to tell at each one. On one ride at Amusement Park X, my husband asked, “What’s the point of this ride?” “There is no point. Where do you think we are? Disney?!”

All of these things bring me to the difference between an amusement park and a theme park. A theme park is a sub-category of the amusement park umbrella. Amusement parks amass rides, games, and attractions to entertain guests. Theme parks use landscaping, buildings, attractions, and décor to create a theme and set a story.

So, yes. I believe that Disney guests are spoiled. Did we expect too much from our local amusement park? Perhaps. Could the park have done a better job at entertaining us and making us want to stay? Absolutely.

These are just a few of the observations I can make about how well Disney does business, but I’m sure there are several more that could be made. I think next time we want to go to an amusement park, we’ll save up our money and head to the House of the Mouse.

Do you think Disney spoils their guests?