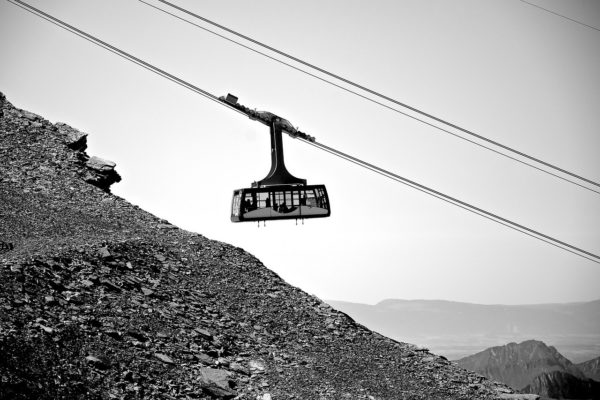 Rumor: Disney World Transportation Takes to the Sky With Gondolas

When Disney World opened in 1971, there was a gondola system known as the Skybuckets, which carried guests between Fantasyland and Tomorrowland within Magic Kingdom. A similar system also existed in Disneyland and Tokyo Disneyland.

However, they all closed in the 1990s due to age, maintenance costs, and the cost involved with upgrading the aged cars. Plus, they had low capacity only carrying four guests per car. It became impractical to continue operating the Skybuckets.

News has come to light that Disney World is looking to bring back this old attraction for an new use and with some major improvements.

It seems Disney has applied for a permit to build an “aerial tramway”. Although permits usually lead to construction, they don’t always. However, this rumor seems pretty solid since it is based on government permit filings.

The request includes a number of structures of different shapes and functions including ones that can change direction of the cars and ones that have platforms. The cars, which would be significantly larger, enclosed, and therefore air-conditioned, would have the ability to detach from the cable lead to assist in loading and unloading wheelchairs, ECVs, strollers, etc. The biggest benefit is that it would have a high capacity- about 4500 people per hour. This is less than the monorail, but the monorail is also millions of dollars more expensive to create, operate, and upgrade.

The permit also suggests that it would connect parks and hotels including Epcot, Disney’s Hollywood Studios, Disney’s Caribbean Beach Resort, and Disney’s Art of Animation. By default, it would also make Disney’s Pop Century accessible since it is connected to Art of Animation via a footbridge.

Even as Disney World guests seem to be living in a world of upsells, it’s also true that Disney is investing more in expanding the parks than they have in the past decade even when accounting for inflation rates. Things have become outdated, and adding some details and a fresh coat of paint isn’t cutting it anymore.

Disney knows that it’s time to make some major improvements and investments.

We’ve seen action in the recent Fantasyland expansion and the now almost complete Disney’s Animal Kingdom expansion adding entirely new lands and making Animal Kingdom an all-day park. In the next couple years, Disney’s Hollywood Studios (probably known by another name at that point) will open as a largely reworked park.

Over the last 40ish years, Disney has expanded from one park and a few hotels to a massive metropolitan area larger than Manhattan. Inter-park transportation is now more necessary than ever, but at a cost of almost $100 million per mile or more, a monorail expansion probably isn’t practical.

Buses have been good enough for a long time, but they’re stretched thin as Disney is adding more stops at hotels and even Disney Springs and more people over all. There are also more Disney Vacation Club areas being added, which means even more hotel expansion.

What’s more, bus transportation may be a relatively low investment up front since Disney only has to buy buses and not actually build new roads, but it’s more expensive in the long run to keep up with the bus maintenance and replacement. It’s also not the most environmentally friendly option, even though they run clean diesel.

A roadway in the air seems like a good solution. It’s estimated to cost about $3 million per mile, which is far less than a monorail expansion. It may cost more upfront than buses, but it will save money in the long run and be more environmentally friendly. The gondola-based aerial tramway won’t replace the bus transportation, but it will alleviate the stress on the system.

Disney isn’t the only community wanting to make this happen. Branson, Missouri plans to have their air tram up and running in a few years, and Portland, Oregon has been using theirs for about a decade now.

There are benefits for guests and for the company.

For guests visiting Disney World, the gondola ride would make it much easier to travel between parks and certain hotels much like the monorail is convenient between Magic Kingdom, Epcot, and area hotels. It will also likely mean that you won’t have to go through security again if you go from, say, Epcot to Hollywood Studios or vice versa. Since the plan is to have pick up and drop off locations within the parks’ borders, there’s no need to go through security again.

Plus, it’s a fun way to travel and an attraction unto itself!

When it comes to the business side, Disney will benefit from this form of transportation too. It’s a well-known fact that guests prefer resorts that connect to the parks in some way other than bus transportation. Resorts that offer walking paths, ferries, and monorails are priced at either the deluxe or moderate level because guests are willing to pay more for this access. If Art of Animation and Pop Century become accessible by air tram, Disney can boost room rates at these resorts and thus justify the upfront expense of the system. Plus, Disney’s Caribbean Beach Resort is already scheduled for a massive renovation project, and Pop Century is scheduled for room enhancements, so it seems like all the pieces are fitting together. Even more, Hollywood Studios is expanding too, so adding another way to access the park will be nothing but beneficial to guests and Cast Members.