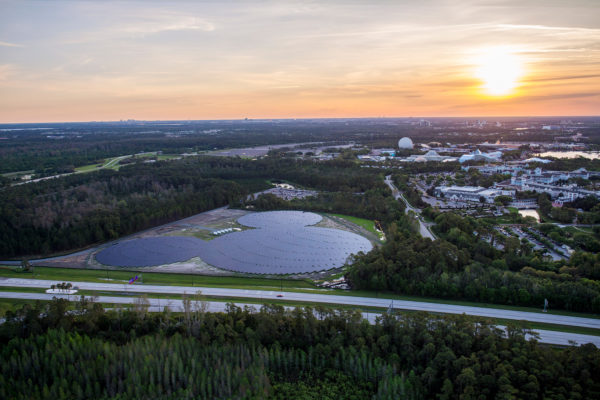 Disney has focused on the environment for decades, going back to Walt himself and his film projects that showcased nature and animals.

Today, Disney continues that environmental legacy with investments in solar to help provide energy for its parks and resorts around the world.  In fact, Disney’s total solar capacity can provide enough energy to power 65,000 homes!

Let’s take a look at Disney’s solar projects around the world:

Solar At The Disney Cruise Line

Disney Cruise Line is close to finishing a 5-acre solar facility at Castaway Cay in The Bahamas. This solar farm includes 4,320 solar panels and will generate approximately 70% of the island’s power. The solar panels will reduce greenhouse gas emissions by 3,000 metric tons of carbon dioxide per year.

Walt Disney World Resort is no stranger to solar energy. The famous Mickey-shaped solar array near EPCOT came online in 2016 as a collaboration project between the Reedy Creek Improvement District (RCID) and Duke Energy.

Disney World is developing two new 75MW solar facilities which are expected to come online in 2022 and 2023. In total, these existing and planned projects will generate 212MW of solar energy, which means that 40% of Disney World’s power needs will come from renewable energy.

Disneyland Paris is creating one of the largest solar canopy plants in Europe.  This solar plant will provide practical and innovative use of 67,500 solar panels sitting atop a covered parking lot. This project will not only save space, provide shade, and protect guest vehicles from inclement weather, but it will also produce 31 gigawatt-hours of energy per year.  That is enough renewable energy to power 17% of the resort. The plant will also have a special Disney touch, illuminating in the shape of a Mickey Mouse head that can be visible at night from the sky.

Hong Kong Disneyland is home to the single largest solar panel site in Hong Kong. The park has installed 5000 solar panels on 20 buildings and attractions – reaching approximately 2.2 million kWh, the same amount of energy generated by 544 three-person Hong Kong households for one year.