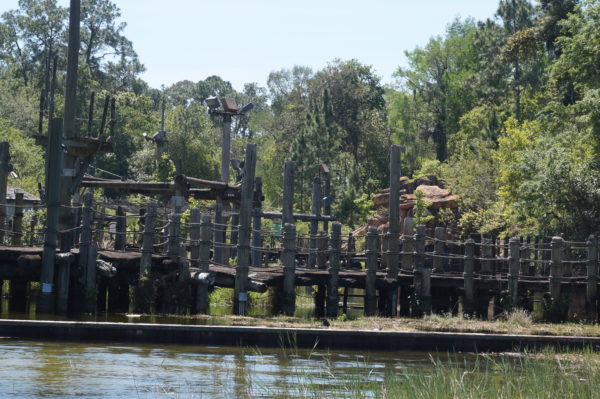 River Country opened in 1976 as Disney’s first water park. It combined fresh-water fun with the beach and waters of Bay Lake and delighted park-goers until it started operating seasonally in the early 2000s and closed permanently on September 1, 2002.

For nearly 20 years, the park has been left to deteriorate.

Some urban explorers have ventured in to find music still playing, towel bins still stocked, and tubes still stacked but absolutely no sign of human activity. (Note: this is not a good idea. If caught trespassing at Disney World, you’ll likely to be banned from Disney property forever.)

What’s even more strange is that Disney never made any official announcement as to what would come of the abandoned park.

On March 5th, 2018, Disney filed permits with Reedy Creek Development District for a development they’re calling Project 89 for the area that was and is currently River Country. The permits don’t detail much about what the project could become, but they mention “geotechnical borings.” This is when they drill into the ground to see if the land is sturdy enough to undergo construction. However, this is typically only done when serious construction is expected.

So what could this serious construction be?  Is the River Country water park coming back?  Probably not.

That said, it’s really hard to tell but for sure what will happen, but it’s easy (and fun) to speculate.

This is most definitely all speculation, but it would make sense that Disney is planning to build hotel accommodations of some kind on this property.

First, Disney’s Hollywood Studios is opening two brand new lands in as many years. Toy Story Land will open in just a few months, and Star Wars: Galaxy’s Edge will open in 2019. What’s more, Epcot is also set for a major overhaul, and Magic Kingdom is also getting a new rollercoaster much like the existing Tron Lightcycle Power Run in Shanghai Disneyland. Disney’s Animal Kingdom just opened Pandora as well. With the influx of people expected, they’ll need more accommodations.

Second, River Country is perfectly located across from Magic Kingdom making it a perfect location for new accommodations. Disney could set up a dock for ferry transportation service straight to Magic Kingdom, and charge top dollar for rooms with a great view not only of Magic Kingdom but also of the nighttime fireworks and of the Electric Water Pageant.

This certainly makes sense not only from a fan’s standpoint but also from a business standpoint.  However, don’t get too excited yet.

It might not be an entirely new resort. There are already two Disney resort hotels sandwiching the property; Disney’s Fort Wilderness Resort and Campground is on one side, and Disney’s Wilderness Lodge Resort, a Deluxe Resort Hotel, is on the other side. Both have experienced recent expansions with new cabins on the one side and new Disney Vacation Club villas on the other. It’s possible that the area could be used for one other the other of these resorts to expand.  Disney could even divide the property so they can both grow.

This wouldn’t be the only new resort hotel in Disney World. They’ve said a new Star Wars Hotel will open up with the Star Wars land expansion in Hollywood Studios, and there’s also rumors that a new resort could be coming near the entrance of Epcot. In fact, Bob Iger, CEO of the Walt Disney Company, has said that Disney World needs more hotels.

Only time and further permits will tell what’s to come of this property.