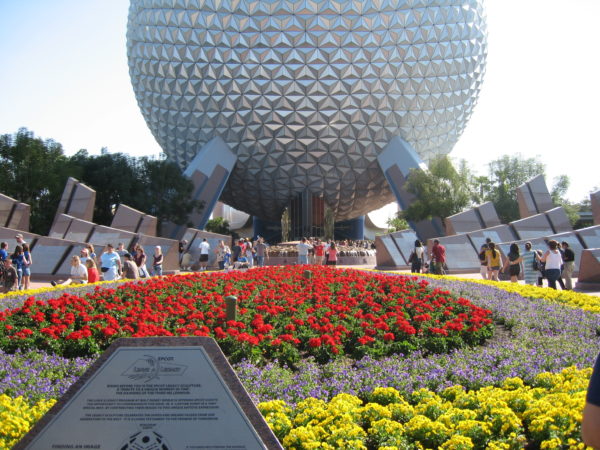 Epcot will soon be the next park to undergo massive changes. It will be the last of Disney’s four theme parks to get significant upgrades in the last several years.

Disney recently filed construction permits for “Project G”, the suspected code name for the renovation of the entrance plaza, with Orange County.

Whiting-Turner Contracting Company, who also worked on the nearby Prime Outlets Orlando and Disney Springs’ T-Rex Restaurant and Rainforest Café, will be demolishing some current structures, moving the Leave a Legacy structures, building new pathways, and creating new hardscape and landscape, which will result in a beautiful new green space that will resemble the original park’s entrance.

Epcot will have several construction projects going on simultaneously. In addition to the entrance project, Disney has also promised that the path will be straightened from Spaceship Earth to World Showcase. While details for this project haven’t been announced yet, the project is expected to be completed before the 50th Anniversary celebrations in 2021.

Epcot already has several projects underway including the Guardians of the Galaxy rollercoaster in the former Universe Of Energy pavilion, Remy’s Ratatouille Adventure in the France pavilion, and the recently announced Play Pavilion in the former Horizons building, which has recently been used as Epcot Festivals headquarters.

Are you excited for a new Epcot entrance?