When visiting Disney’s Hollywood Studios in Florida, be sure to take time to see Disney’s Fantasmic show in the Hollywood Hills amphitheater. This show of lights, water, and firework displays only takes place two to three nights per week, so be sure to check the schedule, so that you will not miss your chance to see the show.

This fantastical show is creative in content, but it is the technical aspects of the show that are truly impressive. Walls of water form a screen, a nearly 60 foot tall manmade mountain is a focal point of the set and a huge moat surrounds the entire stage.

If you want to get a seat, you must arrive at the amphitheater early. Seating begins about 90 minutes prior to show time and seats fill quickly. The good news is that every seat in the amphitheater is a good seat. Guests have full views of all of the action, including the fireworks show, water effects and water screen, from every seat. Still, the 6900 seat amphitheater often fills to capacity, so to avoid the disappointment of not begin allowed to enter the amphitheater when it is full, be sure to arrive early.

Fantasmic is a very popular show at Disney’s Hollywood Studios.

One way that you can guarantee a seat is to opt to buy your tickets to the show as part of a package deal that also includes lunch or dinner. Three restaurants offer this deal:
• The Hollywood Brown Derby
• Mama Melrose’s Ristorante Italiano
• Hollywood & Vine

Some of the restaurants offer the package with both lunch and dinner while others only have the deal for one of the other. You will have to check with each restaurant to learn which deals they are currently offering. When you choose the package, your seat will be guaranteed, but you still must arrive at the theater about 30 minutes before show time.

What to Expect During the Show

The show is a spectacle of lights, music, water, and fireworks.  In the Hollywood Studio’s version of the show, which lasts about 25 minutes, guests can expect appearances from many of their favorite Disney characters. The star of the show is Mickey Mouse as the Sorcerer’s Apprentice. The audience is a witness to his dreams, which appear onscreen. As the show continues, Mickey must overcome various evils such as those brought by well-known Disney villains such as Cruella de Vil, Scar, the Evil Queen, and many others. 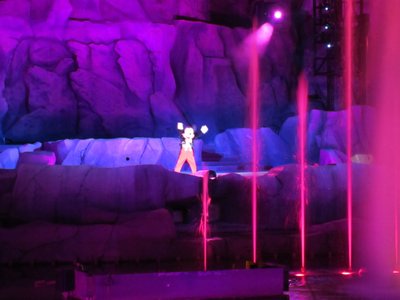 All of the stories are told through the use of lasers, lights, water and amazing pyrotechnics. Some guests enjoy the water effects and other elements of the show so much that they make it a point to return anytime they visit Disney’s Hollywood Studios.

One common question about the show is whether or not it is appropriate for small children. While some children do fine at the show, others do become frightened during certain scenes. In fact, even some adults find some moments in the show to be a bit intense.

There are some portions of the show where the amphitheater goes very dark. During other times, the music morphs from playful and to very heavy, dark, and loud. The portrayal of some of the villainous characters can also frighten some of the children in the audience.  For these reasons, if your child is afraid of the dark, loud noises, or spooky music, you might want to save this show for when he or she is a bit older. 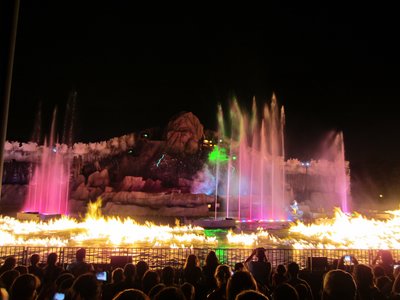 Some parts of Fantasmic can be very intense.

That being said, hundreds of children do attend each performance of the show and nearly all of them enjoy it very much. It is really up to each parent whether or not they think their child will be able to handle the scarier portions of the show.

Versions of the Show

Fantasmic first appeared in Disneyland in 1992. It was so popular, with most shows being completely sold out, that a few years later, in 1998, it was brought to Disney’s Hollywood Studios. The version of the show at Disney’s Hollywood Studios has been upgraded since it debuted. Some of the changes include a complete revamp of the sound system in 2009 and improved pyrotechnics in 2010.

In addition to the technical changes, there have also been changes to the story itself. One example is the manner in which Mickey slays the dragon during one of the climactic scenes of the show. When the show debuted, Mickey would walk on water to defeat the evil dragon. Now, he uses the sword in the stone method of conquering this character.

Another change made to this version of the show was the number of performances. For several years, Fantasmic played every night of the week. It is now offered only between two and three nights per week.

Another version of the show began in spring 2011 at DisneySeas in Tokyo. Expectations are that this show will be just as popular as those at Disneyland and Disney’s Hollywood Studios.

Each version of the show is similar in concept, but includes different characters and special effects. If you visit the different venues where the show is offered, it is definitely worth seeing each version.

Other Tips about Disney Fantasmic

Add Disney Fantasmic to your Disney’s Hollywood Studios agenda. It is sure be one of the highlights of your visit.