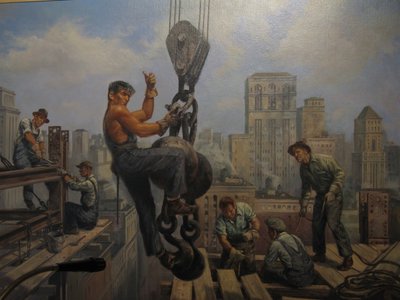 They have fond memories of experiences and characters, and they reward the Disney Company with their loyalty and money.  Lots of money.

On the other hand, these fans are not shy about pointing out issues and concerns, especially when it comes to quality issues.  After all, it was Walt Disney himself who is quoted as saying “I have blind faith in the policy that quality, tempered with good judgment and showmanship, will win against all odds.”

A recent day of reading some of the Disney web sites showed this dichotomy (love that word) in action.

Over at Disney’s Magic Kingdom building after building is covered in construction scrims.  Actually, not just a standard dark green covering, but coverings with photos of what the buildings beneath them look like – in an attempt to hide the grit of construction and keep as much of the architecture and themeing as possible. The Mouse Planet web site shows many buildings covered this way as Disney crews fix up the exteriors (Source).

The same web page also has numerous construction photographs of the New Fantayland – the largest expansion of the original Magic Kingdom  theme park even.  It is an expansion that is sure to bring unique new rides, dining options, and shopping experiences that die hard Disney fans will enjoy, photograph, and discuss endlessly.

On that same day, the Mice Chat web site ran a story about the new Sorcerers of the Magic Kingdom game (Source).  This unique, interactive game will provide a new experience, free of additional charge to those who purchase admission to the theme park.  It combines advanced computer technology with beloved Disney characters in a story that many will enjoy.

On that same page, the author Kevin Yee writes about many different maintenance problems in the various Disney theme parks.  One of the most infamous is the “disco Yeti.”  The Expedition Everest attraction at Disney’s Animal Kingdom is all about tracking the mythical Yeti.  Near the end of the ride, guests actually encounter a huge Yetti animatronic.  The animatronic is one of the largest and most advanced that Disney ever created.  The problem is that the animatronic has been broken nearly since the time the attraction opened.  Since the Yeti character is key to the story, you would think Disney would fix it.  Unfortunately, the Yeti is huge – so huge that fixing the issue would require significant structural changes, and a corresponding long term closure of the attraction, not to mention a big expense.  So instead of fixing the Yeti, Disney put a strobe light on it – creating an inexpensive and not so satisfying quick fix that has gone on for years.

Other examples include broken characters in Splash Mountain, burnt out lights throughout the park, and buildings and artifacts that need a new coat of paint.

Is all this just so much complaining about nothing?  Are fans holding Disney to an impossible standard?

It is all the little details that add up to make Walt Disney World the special place that it is.  This is why Disney is different from Cedar Point, Knott’s Berry Farm, or Six Flags Over Whatever – not to mention the traveling carnival that sets up shop in the open yard down the street for four days each year.  Disney World is not just a roller coaster purchased “off the shelf.”  It is themes, stories, and especially all the details that create a wonderfully magical experience that is greater than the sum of its parts.

Are rabid Disney fans unreasonable?  I don’t think so.  Disney set the bar high.  They are doing many, many great things in both brining in new options as well as maintaining the old.  But there is more to be done.  Yes, it all has to be balanced against budgets.  But, as dangerous as it is to say such things, I think that event Walt himself would probably have agreed:  quality will win out – and there are a few things around Disney World that just aren’t at a high level of quality yet.