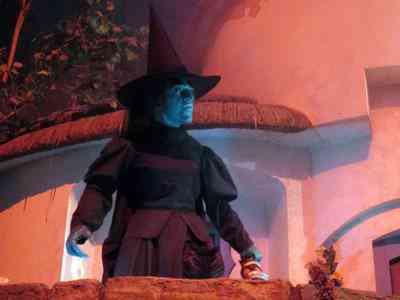 Did you miss this news too? It seemed pretty big to miss, but I just recently heard about it.

According to several sources, including Al Lutz (a blogger generally considered to be a reliable source, and who has been quoted in large papers like The New York Times) and Laughing Place, Disney has outsourced all of its work on audio animatronics to a third party company called Garner Holt.

Disney formed a division called MAPO in the 1960s, using some of the money earned from Mary Poppins. Some say the acronym actually stands for MAry POppins, while others say it stands for Manufacturing And Production Organization.

Whatever it really stands for, MAPO was the part of Disney responsible for developing audio-animatronics. Their work included many famous items, including mechanical Robin that Mary Poppins held in the movie of the same name, figures for the 1964 World’s Fair, presidents in the Hall Of Presidents, Country Bears, and even Skippy from the long lost Alien Encounter in Tomorrowland at Disney World.

Now Disney has shifted all the future work of animatronics to Garner Holt.

Garner Holt Productions is an organization based in California that designs and creates animatronics and attractions for museums, restaurants, and theme parks. They have worked with a huge list of customers that includes many big names like Legoland, Knotts Berry Farm, Universal Studios, NASA, and Chuck E Cheese.

Garner Holt has also worked extensively with Disney for many years. According to Jim Hill on a Touring Plans podcast, Disney in effect conducted a final test of Garner Holt’s work by having them build all the audio animatronics for the Under The Sea – Journey Of The Little Mermaid dark ride, except for two of the Ariel animatronics and the Ursula animatronic.

In the past, Garner Holt built the huge, fire-breathing dragon for the Disneyland edition of Fantasmic. They also built figures for the critically acclaimed Cars Land in Disney’s California Adventure.

The sources mentioned above state that Disney turned over a Disney inventory of parts that includes 500,000 different pieces going back as far as 40 years.

So these guys at Garner Holt obviously have a lot of experience and expertise, and Disney does a lot of business with them and trusts them.

Of course, outsourcing is a very common occurrence in business, at Disney, and just about everywhere else.

When you eat a delicious Mickey Waffle at the character breakfast at Chef Mickey’s in Disney’s Contemporary Resort, you probably realize that Disney didn’t grow the wheat or mill the flour. That was outsourced. Disney can take the components that others provide, and turn them into something special and unique to Disney.

However, one of the things that makes Disney unique and gives them a leading-edge, at least in the past, has been animatronics. What happens if Disney now just gets the same animatronics that everyone else gets?

There are certainly pros and cons. Has Disney given up on innovation in audio animatronics? What will happen to programs like the Living Character Initiative and work like the Amazing Destini and the robot that can play catch?

I have heard that some Imagineers believe we have entered a post-animatronic world, that Disney and others will use fewer animatronics in the future. When you look at the wildly popular Toy Story Mania at Disney’s Hollywood Studios, an attraction that always has huge lines, but doesn’t have a single animatronic in the ride (except the very cool Mr. Potato Head in the queue), you can see that the argument might have some merit.

So, is Disney just ahead of the curve by getting rid of the mechanical development of animatronics? Isn’t it the connection to the characters that really matters?

Or have they given up a key piece of technology that as critical to their history, and now ensures they will become followers and not leaders?

Was it a good idea for Disney to outsource animatronics?