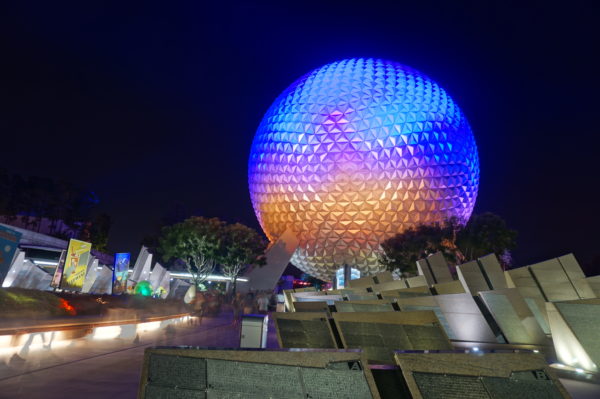 Epcot’s 35th Anniversary: I Will Be There. Will You Join Me?

It’s almost hard to believe, but Epcot has been open for 35 years. Disney will celebrate the anniversary on October 1, 2017.  The park originally opened on October 1, 1982.  Where has the time gone?

This Sunday at 10:01 AM (get it?) Disney will present an anniversary ceremony on the Fountain View stage. The Voices Of Liberty and Mariachi Combre will perform.

The Fountain View Stage is right next to the Fountain of Nations, which was part of the dedication of Epcot just a few weeks after the opening on October 24, 1982. Disney’s Card Walker presided over the ceremony saying, “Nations from around the world brought with them waters from the great oceans, the seas, the rivers, and the lakes on our planet, Spaceship Earth. These waters will flow together as a symbol of the oneness of humankind and the hope for peace among nations…”

Disney will also offer other 35th anniversary souvenirs for an extended period of time.  Offerings will include shirts an Disney trading pins. Since Epcot opened in 1982, many of the souvenirs will be influenced by the 1980s designs and colors that originally adorned the park. Of course, Figment will make many appearances.

There will also be two special events for D23 members.

The First is the Fanniversary of Epcot, which will take place from 9am to 4pm on October 1st. During this time, there will be some exclusive events including a panel with recognizable Disney Imagineers and leaders of Epcot and access to the one-day-only pop-up shop for the “I was there” merchandise. Guests for this event will also get private viewing for the Fountain Stage Ceremony.

The second exclusive D23 members’ event is a Progressive Dinner Celebrating 35 years of Epcot during which you’ll get to eat at several locations around Epcot including the Living Seas Salon and the General Motors Lounge. These areas are typically reserved only for the sponsors’ employees and special guests! It also includes reserved viewing for IllumiNations, a gift, and a behind the scenes tour of an iconic attraction, yet to be determined.

If you’re not a D23 member, but these events sound good, don’t rush out to join. These events have been sold out for quite a while.

Guests will have the opportunity to pick up a commemorative Guide Map at the park entrance.  I’m looking forward to seeing that!

All of the celebrating also happens while the Epcot International Food And Wine Festival is taking place. That yearly festival started in August and continues through November 13, 2017.

The anniversary festivities for the day will wrap up at 9 PM with a presentation of Illuminations: Reflections of Earth. Disney will adding some extra fireworks at the end of the show to make it extra special.

If all goes well with the schedule and technology, I hope to do a few Facebook Live broadcasts during the day – probably at 10am ET for the anniversary ceremony and at 9pm ET for the fireworks.  Perhaps I’ll be able to do a few other broadcasts at some other times too. I hope to see you there!

When did you first visit Epcot? Will you be there Sunday for the 35th anniversary?