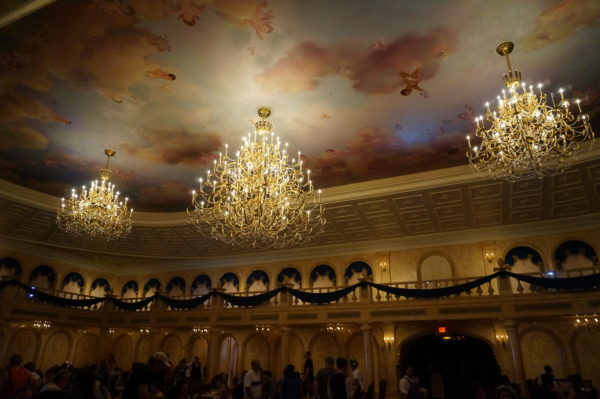 Disney Creates an Edible Chocolate Cup that Looks Like Chip

I recently reported that Disney would be giving the menu at Be Our Guest, a table-service restaurant in Magic Kingdom‘s Fantasyland, a makeover, and now we know what one of the changes will be!

Remember that “personal dessert platter” that seemed very vague? Disney has announced exactly what it will include!

The new platter will be served on a rose-embossed plate, and the whole thing is truly a work of art. On the platter, which will be available on the new menu being released in July, you’ll find a raspberry macaron with a lemon filling and tipped with fresh raspberries and a whole maraschino cherry dipped in dark chocolate and topped with hazelnut chips.

At the center of the platter, there will be a very cute white chocolate cup designed to look like Chip, the loveable teacup from Disney’s Beauty and the Beast movie. The cup will be edible, and even better: it’s filled with Grey Stuff, which is a nod to the line in Lumiere’s performance, “Try the grey stuff. It’s delicious! Don’t believe us? Ask the dishes!”

If you’ve never had the Grey Stuff, know that it tastes a lot better than it sounds. It’s actually a cookies and cream panna cotta made with cookies, vanilla, chocolate, and whipped cream. Obviously, mixing chocolate and vanilla together would give you a grey color, and that’s how Disney achieved the less than beautiful color on a very delicious dessert.

Like I said, the platter will be released late this summer as part of a new three-course prix fixe (fixed price) menu, which is designed to give the restaurant a more luxurious feel and make diners feel like royalty. The menu will be somewhat limited, but you’ll still have a choice of appetizer and entrée. Everyone will get the dessert platter. This is a great deal if you’re on the Dining Plan, but maybe not so much if you’re paying cash.

New Chip cup dessert at Be Our Guest: Fun?