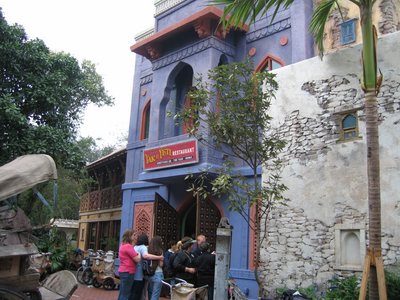 Fortunately, there is no shortage of dining options at Walt Disney World, ranging from snack kiosks and fast food counters to formal table service restaurants.

In general, dining at Disney World is relatively expensive. However, prices vary significantly depending on the type of dining experience and food you choose to eat. Comparatively inexpensive meals can be found at counter-service locations or cobbled together from snack carts, while table service restaurants run the gamut from mid-price family-style meals to exclusive prix fixe meals at select locations.

The four Disney World theme parks and two water parks are dotted with snack carts or small kiosks serving fruit, ice cream bars, popcorn, churros, and similar items that can be eaten on the go. Snack carts are a boon to theme park guests who like to move at full speed, hitting as many attractions as possible during the day. They are also great for children who need a bit of extra mid-morning or mid-afternoon fuel during the day.

In addition to snack carts, the Disney World theme parks each feature a large number of counter-service restaurants where guests can grab a relatively quick meal. These restaurants are mostly fast food style, in which you order and pay at a register before finding a table among patio or cafeteria seating. Counter service locations usually feature a separate kid’s menu, but the regular menu is rarely exotic and the food should be familiar to most children.

Some table service restaurants include entertainment such as character dining or dinner shows. The family-friendly experiences are mostly buffet-style, and usually require advance reservations due to their popularity. These experiences can also be lengthy as you wait for characters to visit your table or enjoy the live performances, so it is best to schedule a decent chunk of time into your day for these restaurants.

A Few Options Best For Adults

While almost all dining opportunities around Walt Disney World are appropriate for the whole family, a small handful are best for adults looking for an evening away from the kids. Formal restaurants such as Victoria and Albert’s at the Grand Floridian Resort and Spa, Kouzzina by Cat Cora on Disney’s BoardWalk, or Todd English’s Bluezoo in the Walt Disney World Dolphin are high priced signature dining experiences.