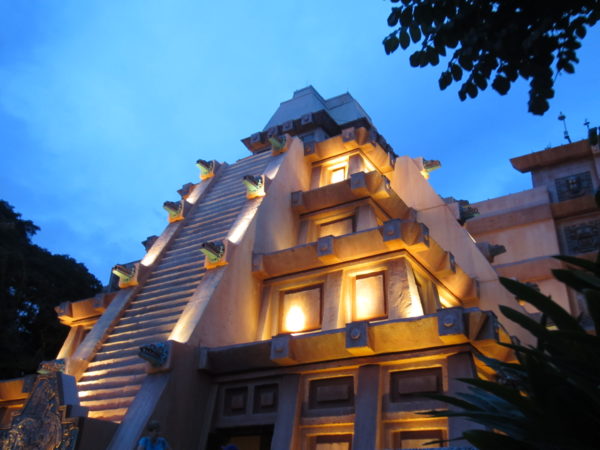 Looking up at the Mexico Pyramid with lights on at dusk

Part of what I love about Epcot is its dedication to portraying the cultures of the different countries in World Showcase. Today, we’re going to take a look at the newest exhibit in the Mexico Pavilion.

The gallery exhibit is just inside of the pyramid in Mexico, and it showcases Mexican culture specifically having to do with the public holiday, Dia de Muertos, or “Day of the Dead.”  The holiday is, traditionally, a two-day celebration meant to honor deceased loved ones.

Mexican and Mexican-American artists including Jose Guadalupe Posada, Catalina Delgado-Trunk, Rob-O, and the Linares Family have works on display.

The colorful banners and skeleton images are typical of Dia de Muertos.  The holiday used to take place in the early summer, but is now held on November 1st and 2nd.

Those celebrating in the US may begin celebrating earlier to coincide with Halloween, All Saint’s Eve, All Saint’s Day, or All Soul’s Day. One of these days is dedicated to departed children and the other day is for adults who have passed.

The holiday, which has been celebrated for some 3,000 years, reminds those still living to enjoy life while you still can. That might sound a bit morbid, but children are taught at a young age, as part of the Mexican culture, that death is a part of life. Instead of mourning those lost, Dia de Muertos uses toys, games, colorful parades, festivals, lively music, and delicious Mexican Cuisine to honor their memory and celebrate life.

This exhibit comes ahead of the anticipated release of the Disney Pixar movie Coco, which is set to open in US theaters on November 22nd, 2017. The movie’s main character is a 12-year-old boy who longs to follow his dreams of becoming a musician, but his family says it won’t take him anywhere. He sets off to solve a centuries-old mystery.

Don’t worry about rushing to Disney World to catch this exhibit. Disney says it is a long-term project with no anticipated closing date.

Does Disney do a good job honoring cultures in World Showcase?