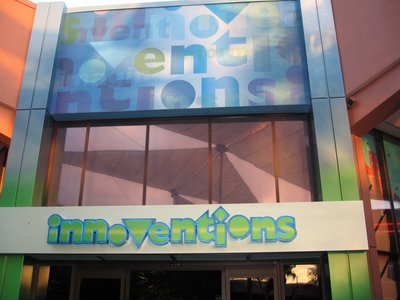 Disney’s new Habitat Heroes pavilion inside the Innoventions area of Epcot Future World has created quite a controversy.

Sponsored by the insurance giant Blue Cross and Blue Shield, Disney created new characters as stars of the pavilion – using the clever names Callie Stenics and Will Power (calisthenics and will power, get it?).  These heroes help you learn to fight against snacking, sweets, and fat.

The idea is to help kids learn about becoming more active and become more healthy.  Using video games, you can blow up virtual televisions, hold a virtual food fight, and use “Dance Dance” type of technology to control screens.   As is often the case with Disney Innoventions experience,  Disney also has built a companion web site so that the learning and play can continue when guests get home.

What’s The Problem With This?

So what is so bad about all this?  Health statistics say that childhood obesity and inactivity are huge problems, with huge real-life implications.  Michelle Obama has made it her personal cause, using the platform afforded by the White House to raise awareness.

Unfortunately, while the goals are noble, the topic is very sensitive.  People ranging from doctors to activists have spoken out against the approach Disney took.  They said that the characters are stereotypes, and the key messages play into humiliating messages.

Disney isn’t a company that likes to create bad press over its content and entertainment offerings, especially at its theme parks where everything should be smooth and happy.  Disney decided to shut down the attraction, stating that it was in a soft open period and was gathering guest feedback.   It has also shut down the companion website.

So did Disney badly miscalculate the sensitivity of this issue?  After all, they have been working for years to introduce more health food options at the theme parks.  Or, are they getting beat up by a small but vocal minority that is overreacting?  Stay tuned.