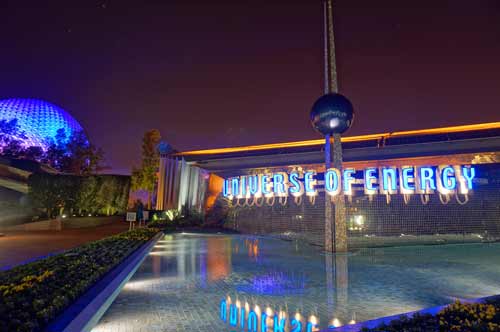 When you think of Epcot, you might think about science, technology, and culture.  However, you can also think about one of the most classic and long lasting forms of Disney storytelling and attraction design: the dark ride.

The dark ride has been around for over a century, but I would argue that Walt Disney himself perfected it, and it can still be seen in his parks today.

It might be useful to first define what a dark ride is. For purposes of this article, I will consider a dark ride to be one in which the ride vehicle leads riders through an attraction with strategically placed, artificial lighting in multiple rooms with scenery, animatronics, special effects, music, narration, and video. The classic dark rides gives riders the feeling of being transported to a different time and place.

There are many attractions at Disney World that fit some of these criteria, but the three rides listed below, which are in Epcot’s Future World, fulfill Walt’s intentions for a dark ride and also his desire to bring the latest and greatest technology into EPCOT.

The Universe of Energy pavilion originally housed an attraction by the same name sponsored by Exxon Mobile from opening day to 2004. Since then, there hasn’t been a sponsor, but Disney brought in audio-animatronic versions of some pretty famous people including Ellen DeGeneres and Bill Nye the Science Guy. Alex Trebek, Johnny Gilbert, and Jamie Lee Curtis also make appearances throughout the ride.

The original attraction took a serious approach to energy, but the new version is more light-hearted. It begins with Ellen’s dream of playing Jeopardy with old rival Judy Peterson (played by Jamie Lee Curtis), and Albert Einstein. By the end of the first round, Ellen is losing miserably because she knows nothing about energy. Bill Nye offers to teach her what she needs to know, and the two proceed on a journey that takes Ellen billions of years into history to the formation of Earth and the discussion of fossil fuels. They (and you) then enter a Primeval Diorama in which Ellen learns about various kinds of Dinosaurs. Next, guests hear a prehistoric broadcast and see a live-action film in which Bill teaches Ellen about current and future energy sources. The attraction ends with a return to Ellen’s dream Jeopardy game. She now knows more about energy and is able to defeat her rival, Judy Peterson, who is a Professor of Energy at Princeton University.

Since the beginning, this attraction has been quite sophisticated and energy-friendly. When it was built, the building was fitted with 80,000 roof-mounted solar panels that powered batteries and moved the large ride vehicles, which were on guide wires rather than a traditional track.

The whole attraction lasts just under 40 minutes, and one show can seat up to 500 people. Although the ride vehicle only goes through three scenes, each one is different, and the ride vehicle even changes construction on one point breaking into six pieces to allow for better viewing. The other areas are theater-style with large-format projection screens.

Spaceship Earth is the iconic geodesic sphere at the entrance of Epcot that houses a classic dark ride. The omnimover ride vehicle takes guests on a 15-minute ride through the history and the advancements of communication from prehistoric days to the future. There are several artifacts within the ride including a printing press and computers along with several audio-animatronic figures that show how communication has advanced. The original story line was written in part by American author, Ray Bradbury who is famous for his science fiction stories including Fahrenheit 451.

The structure is made of Alucobond panels and has 954 triangles. It took over two years to complete the construction, which was first sponsored by the Bell System from the opening of the attraction until 1984. At that point, their parent company, AT&T, took over sponsorship until 2004. In 2005, Siemens began to sponsor the ride and this continues to this day.

The ride, which travels slowly through time, ends by giving guests the opportunity to interact with a computer screen in the ride vehicle. Guests can choose from a variety of options, and the computer will customize their future based on the options the guests choose.

2. Journey into Imagination with Figment

Journey into Imagination with Figment comes in at number one on my list of top dark rides at Epcot because it combines both science and creativity- isn’t that what Walt was all about?

The original attraction featured Chuck McCann as the Dreamfinder. He creates a figment of his imagination, a small, purple dinosaur with “two tiny wings, eyes big and yellow, and horns of a steer.” The two took the audience on a tour of the imagination including rooms dedicated to Art, Literature, Performing Arts, and Science. The next attraction all but removed Figment and fans revolted. It was a Honey, I Shrunk the Audience type of ride, and guests toured the Imagination Institute as test subjects entering the Imagination Scanner with no imagination then travelling through labs to test and increase their imagination: Sound, Illusion, Color, Gravity, and Connections. Figment’s few cameo appearances were not enough for fans of the original ride. Disney heard their plea and returned Figment in 2002 when they opened Journey Into Imagination with Figment. With this newest version, riders learn about the five human senses: sight, sound, smell, touch, and taste. Figment wreaks havoc, and Dr. Channing leaves the tour. Figment takes over and leads a fun-filled tour singing “One Little Spark,” a song from the original attraction, along the way.

Love it or hate it, the Frozen phenomenon has stood the test of time – and has made Disney billions upon billions of dollars in movie tickets and merchandise.  Rather than wait several decades to turn the blockbuster movie into a dark ride (as was the case with The Little Mermaid), Disney moved relatively quickly to build a dark ride based on Frozen.

Frozen Ever After took over the spot previously occupied by Maelstrom, and initially riled many fans.  However, as much as people didn’t want to lose the classic Norway dark ride, not too many folks were booking their vacation to see the grand finale scene that featured an oil rig.

Today, guests can relive some of their favorite memories from the move with Anna, Elsa, and Olaf.  You can debate the fit to the attraction and the overall philosophical direction of World Showcase and Epcot generally, but the long lines and smiles on the faces of guests who experience this latest Disney dark ride suggest Disney made a good decision.

What is your favorite Epcot Dark Rides?