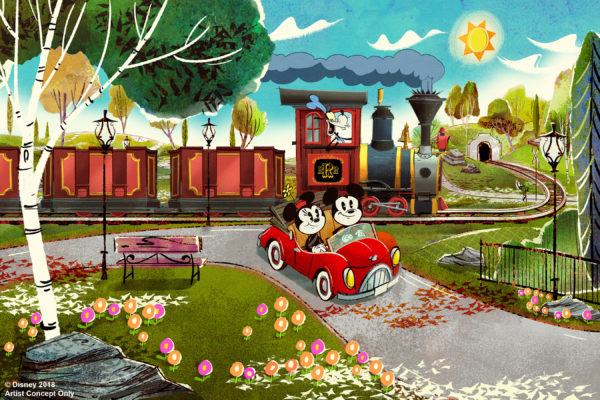 Walt Disney World Resort guests will step through the movie screen and join Mickey and pals on a wacky adventure set to open at Disney's Hollywood Studios in Florida in 2019. Mickey & Minnie's Runaway Railway, the first-ever ride through attraction themed to Mickey and Minnie Mouse, will feature dazzling visual effects, a lovable theme song, and twists and turns ideal for the whole family.

Last year, I followed the D23 Expo in the United States and published some exciting news from that convention including the announcements of Guardians of the Galaxy coming to Epcot‘s Future World and the gondola transportation system coming to a few Disney resort hotels and theme parks.

D23: Japan recently took place and Disney released some more information about these and other attractions coming to parks all over the world.

Today, we’re going to focus on D23: Japan announcements regarding Walt Disney World Resort in particular. Before we get to the major announcements, here are a couple brief updates:

We’ve already been told that the Star Wars-themed hotel will be immersive, groundbreaking, and epic. There are times when I still doubt whether this will actually happen. However, Disney appears to be moving forward with the plans.

This hotel concept will allow guests to board a starship and depart on a multi-day adventure in a Star Wars-themed land, and it begins as soon as you arrive. You can dress up as a Star Wars character, and you’ll follow a storyline throughout your stay.

We’ve also been told that the hotel will seamlessly connect guests to the new land coming to Disney’s Hollywood Studios in 2019 called Star Wars: Galaxy’s Edge.

While Disney has not announced an opening date for this luxury hotel unlike anything that currently exists, they do continue to talk about it and provide updates, so it seems as though the project is moving forward.

As Disney’s Hollywood Studios has transitioned, one of the attractions that had to close due to sponsorship issues was The Great Movie Ride. This opening day attraction had many fans, and lots of people were upset when the attraction closed. It was not only a nostalgic Disney attraction but it also paid homage to some amazing movies from Hollywood history.

Regardless, Mickey and Minnie will be taking over, and I’m pretty excited about it!

We now know that the attraction will open in 2019. It will be the first ever ride-through attraction with a Mickey and Minnie Mouse theme, and the whole ride will feature an original story and theme song. Guests will journey inside the wacky and unpredictable world of Disney Channel’s Emmy Award-winning Mickey Mouse cartoon shorts like this one. These 2D shorts will come to life in a multi-dimensional experience thanks to new technology.

I expect this to be a great, new classic Disney attraction that takes full advantage of Disney’s most valuable intellectual property- Mickey Mouse himself and his one and only girl.