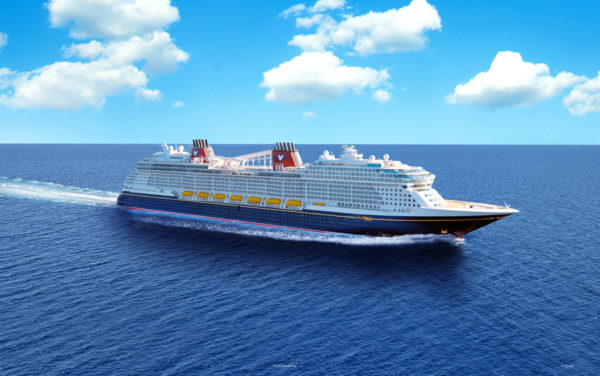 The Disney Cruise Line announced some details about the Disney Wish, the fifth ship coming to the company’s fleet and setting sail in the summer of 2022.

Disney will present a new attraction-at-sea, the AquaMouse.  It will be a water ride that includes show scenes, special effects, and lighting effects along a 760 foot long tube track that is suspended above the ship’s upper decks.

The ship’s upper deck will feature six pools themed to Mickey Mouse and his friends.  Located on tiered decks, the pools will be surrounded by lounge chairs.

A water area for families with young kids will include a wading pool, family waterslide, splash zone, and a smoothie bar.

The adults-only area will include a poolside bar, a cafe, and an infinity pool.

Disney’s first Frozen-themed theatrical dining experience will include live entertainment by Elsa, Anna, Kristoff, and Olaf, and will serve up cuisine infused with Nordic influences.

Named for the year that the Disney Company was founded, 1923 will celebrate Disney’s legacy and the golden age of Hollywood and animation.  It will offer food inspired by California.

A new stage in the atrium, this space will provide interactive entertainment.

This new entertainment area will change from a family setting in the daytime to an elegant adults area in the evenings and will include live shows and programs throughout the day.

This futuristic sports arena will provide a place for combining physical activity with imagination.  Guests can participate in challenges and game show-style competitions for families.

These screening rooms will provide guests with opportunities to see both classic and first-run films from Disney, Pixar, Marvel, Lucasfilm, and more.

Kids can explore a high-tech Avengers headquarters.  Young “recruits” will train to be the next generation of Super-Heroes with the help from Black Panther, Spider-Man, Ant-Man, and the Wasp.

Three activity rooms will allow princes and princesses to explore their creativity at Rapunzel’s Art Studio, read and act out stories at Belle’s Library, and test newfound icy powers at Anna and Elsa’s Sommerhus.

Kids can learn about how Disney Imagineers create magic through hands-on activities and inventive experiments.

This babysitting service for kids from age 6 months to 3 years is inspired by the classic Disney attraction.

Kids aged 11 to 14 can hang out with others their age.

Kids aged 14 to 17 can hang out with others their age.

This bar will be detailed and immersive, offing grown ups interactive tasting experiences and signature beverages inspired by Star Wars locations from around the galaxy.

Palo goes to the next level, combining Italian dining with a modern steakhouse inspired by Cogsworth from Beauty and the Beast.

Romantic and intimate, the premier dining experience on the Disney Wish will include a menu by the three-Michelin-starred chef Lallement.  The restaurant will be inspired by Lumiere from Beauty and the Beast.

This lounge will offer pre-dinner aperitifs and after-dinner cocktails.  It will be located near the entrance to the Palo Steakhouse and Enchanté, and it is inspired by the rose from Beauty and the Beast.

The Disney Wish’s maiden voyage will be on June 9, 2020. It will include a five-night cruise to Nassau, the Bahamas, and Castaway Cay.  From there, the ship will sail three- and four-night cruises from Port Canaveral.

Do you plan to sail on the Disney Wish?