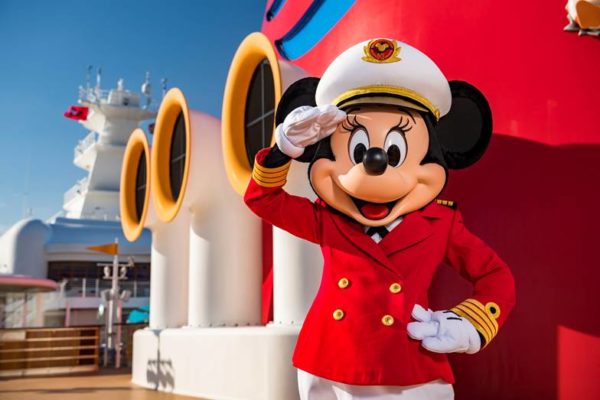 Minnie has always been an independent woman with a keen sense of style, but she’s taking her “can do” attitude even farther – and there’s just no telling how far she’ll go!

Minnie – sorry, Captain Minnie – has now set her sights on future generations and wants to let girls know that they can do anything they want – including becoming a cruise ship captain!

The captain role has traditionally been a male-dominated career choice, but Disney knows that girls take on this role too. Disney is turning that stereotype on its head by making Minnie a Cruise Ship Captain.

Her new role, effective immediately, will start with community visits to Ports of Call and Home Ports along with a female Disney Cruise Line officer or crewmember. The purpose is to spread awareness of the variety of career choices to all children regardless of gender stereotypes.

Aboard the Disney Cruise Line, there will be new youth activities for young captain hopefuls to practice STEM through engaging, hands-on activities in Disney’s Oceaneer Lab.

There will also be special merchandise released in coordination with Minnie’s new role including a new Captain Minnie plush and a Pandora jewelry charm, which will only be available on Disney’s Cruise ships.

In the parks, young girls will find Minnie’s Captain outfit – smart white trousers or a white skirt, and a bold, red jacket with the captain’s insignia – in the Bibbidi Bobbidi Boutique.

In addition to these activities, Disney will introduce four scholarships, one for each ship, at the LJM Maritime Academy in The Bahamas for girls and young women who want to pursue a career in the maritime industry. The three-year program will consist of two years of study plus one year on board one of the DCL ships.

Excited to see Minnie Mouse as a Cruise Ship Captain?