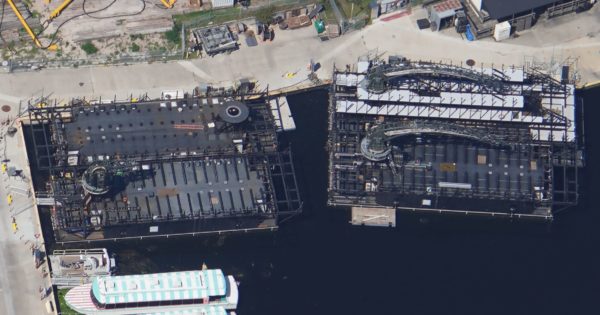 Ever since Illuminations shut down, and even during the temporary replacement show of EPCOT Forever, we have been anxiously awaiting the new nighttime spectacular, HarmonioUS.

HarmonioUS will feature Disney music reimagined by musicians from around the world, which is fitting given that the show will take place in the World Showcase lagoon.

The show will feature four huge barges on the water of the lagoon.  Each will include massive LED panels, water features on moving arms, fireworks, and other effects.

Twitter user @bioreconstruct has once again taken to the skies above Disney World to share some photos of the construction of these new barges.

Aerial look at 4 barges of EPCOT’s new HarmonioUS show. These will have rotating arms, and 2 of the barges are now getting side panels hiding the arms from view. Compare to earlier Tweet in this Thread. pic.twitter.com/0M89FfyYhZ